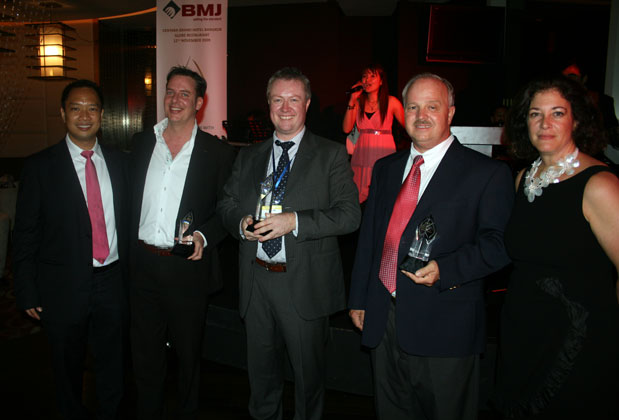 Representatives of Sopariwala Exports, Filligent Ltd., U.S. Flue-Cured Tobacco Growers Inc. and Andromeda Forwarding received their Golden Leaf Awards trophies during a festive ceremony in the Globe restaurant on the 23rd floor of the Centara Grand Hotel in Bangkok.

Against the breathtaking backdrop of Bangkok’s nighttime skyline, George Hendrata, CEO of Indonesian cigarette paper manufacturer BMJ, congratulated the winners with their achievements in areas such as product quality, customer service and corporate social responsibility. BMJ is the exclusive sponsor of the Golden Leaf Awards.

The winners expressed their appreciation and told the audience about the efforts that contributed to their recognition.

This was the fourth edition of the awards program, which was created in 2006 by BMJ and Tobacco Reporter to recognize tobacco companies and their suppliers for outstanding achievements in five categories—most impressive public service initiative, most promising new product introduction, most exciting newcomer to the industry, most outstanding service to the industry and the BMJ most committed to quality award. In addition to their trophies, winners of the Golden Leaf Awards received a $1,000 donation to a charity of their choice.

The first three ceremonies were held in Bali (2006), Paris (2007) and Rio de Janeiro (2008). The next event will take place in Bangalore, India, in fall 2010. Please look for entry forms on Tobacco Reporter’s Web site and in its print edition.

Sopariwala Exports received a Golden Leaf Award in the most impressive service initiative category. As one of India’s largest exporters of tobacco and tobacco products, Mumbai-based Sopariwala believes it should give back to the society from which it gained its knowledge and wealth so that others benefit as well.

The company runs several charitable trusts—the South Bombay Public Charitable Trust and Aishabai & Haji Abdul Latif Charitable Trust. Sopariwala Exports has taken a particular interest in education because it believes education is the surest route for people to overcome the devastating effects of poverty. The challenge is particularly pressing in India, where literacy remains below the threshold level of 75 percent.

The company has adopted more than 16 municipal schools, with a total student capacity of 23,000. Among other initiatives, Sopariwala has helped its schools attract better-qualified teachers and provided vocational courses. Since starting its program in 1998, the passing percentage of board-examinations has increased threefold. At one of the schools, the passing percentage has even increased to 100 percent—from a paltry 34 percent before.

Sopariwala Exports has also adopted a “children’s village” at Lonavla, based on the concept of the international SOS Village Movement. The village provides a home for orphans and destitute children, offering all basic amenities and opportunities to help them develop their full potential.

In addition to its education initiatives, Sopariwala Exports provides free medical aid to the poor and the needy, scholarships for higher studies on merit and coaching classes for public service office entrance examinations.

Currently, the company is in talks with various technical institutes for a partnership that would allow children with an inclination toward technical education to enroll.

Filligent Ltd. received a Golden Leaf Award in the most promising new product introduction category. A Hong Kong biotech company, Filligent launched a new cigarette filter in the third quarter of 2009 that it says reduces biological activity of mainstream cigarette smoke by 30 percent compared with a leading “lights” cigarette as measured by the Ames assay using TA-100.

In addition, the new filter, called Gen4B Microblue, reduces several key mainstream smoke constituents when compared to the leading light cigarette. Crucially, this is done without effecting a change in the cigarette smoke taste.

The Gen4B Microblue has a dual-filter segment construction containing special granules in the tobacco side filter segment. The granules produced by Filligent USA are the same size as carbon granules normally used in cigarette filters and can be mass-produced on standard dual-plug filter-making equipment.

The Gen4B granules may be blended with standard activated carbon granules to accomplish mainstream gas phase constituent reduction. The new filter can be produced by Filligent USA, or Filligent can supply the granules to filter or cigarette manufacturers for production in their own operations.

Most exciting newcomer to the industry

Shisha shop Arabian Nights received a Golden Leaf Award in the most exciting newcomer to the industry category. Arabian Nights is a first-of-its-kind shisha shop featuring an elite showroom of shisha and its accessories. The store provides a wide array of shishas sourced from around the world.

Based in Mumbai, India, the shop now has 12 exclusive branded retail chain outlets in India. It has established showrooms in the country’s major metropolises and is planning to move into second- and third-tier cities in India. It also has plans to establish itself internationally.

The Arabian Nights shisha shop is an initiative of Sopariwala Exports.

Most outstanding service to the industry

In response to the challenges, the company developed a strategic program to save money while improving customer service. Among other changes, the company eliminated its sales force and set up “master distributors” to sell its products.

While the company had to overcome some skepticism about its plans at first, employees, customers and business partners today appear very pleased with the changes. The best evidence of this is the sales figures of Flue-cured Tobacco Growers’ flagship brands, which the company says have grown “tremendously” since implementing the program.

BMJ Most committed to quality award

With a series of dedicated certifications and in-house learning procedures, Bimo succeeded in establishing itself as a respected BOPP producer for the cigarette industry, increasing volumes five-fold and reducing proportionately claims and problems for its customers through product quality and consistency.

The company has certifications from ISO (9001 and 14001), the British Retail Council and Institute of Packaging and the American Institute of Bakers, among others.

For the third year in a row, Andromeda Forwarding took home the People’s Choice Award. As happened during previous editions of the Golden Leaf Awards, the judges were overwhelmed by a large number of customer nominations for Andromeda Forwarding—a recognition in its own right. The repeated wins by Andromeda prompted one judge to suggest renaming the trophy the “Bart Award,” after Andromeda’s CEO Bart Brouwerens.