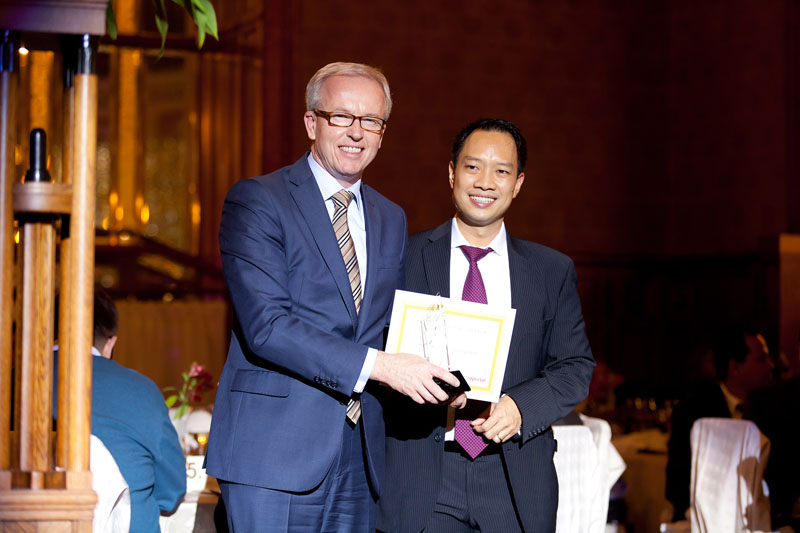 Representatives of Alliance One International, Reconex, Eco2, NDC Infrared Engineering and Vrijdag Premium Printing accepted Golden Leaf Awards during the TABEXPO gala dinner on Nov. 16 at the famous Restaurant Francouzska in Prague. Andromeda Forwarding took home the People’s Choice Award due to the sheer number of client recommendations it submitted.

Alliance One International’s agronomy team received a Golden Leaf Award in the most impressive public service initiative category for its efforts to promote farmer sustainability and food security in one of its major sourcing areas, Malawi.

Malawi has played a leading role in the world burley market. Alliance One felt that for this to continue it was necessary to address the issues of farmer sustainability and food security.

The Alliance One agronomy team in Malawi was tasked with finding a solution to these challenges, and as a result of a dedicated and professional approach, they have produced the required results.

The team focused on contract growing, modeled on an integrated production system (IPS) that provides for a sustainable and fully compliant crop that also affords a contribution toward food security.

Through IPS, the Alliance One agronomy team was able to improve the quality of the tobacco as well as increasing farmers’ yields. The higher leaf quality enabled the farmers to attract significantly higher prices—up to $0.40 more per kg—for their tobacco.

The agronomy team’s efforts helped efficient farmers managed achieve yields in excess of 1,600 kg per hectare, compared to the average of 700 kg per hectare for noncontracted farmers selling through the auction system.

Reconex, made by HT Agro, was recognized in the most exciting new product introduction category for its unique properties.

Most existing reconstituted tobacco products fall into two categories—reconstituted sheet tobacco, made using mostly stems and produced on a paper machine, and drop caste sheet, which tends to be less expensive and of lower quality.

Reconex, by contrast, is an extruded product, which gives it unique properties, including considerably higher fill value and the flexibility to produce exactly each customer’s requirements.

The process can use any type of waste or scrap tobacco products. These are milled into a fine dust and then a suitable binder, along with some moisture, is added and fed into the extruder. The resulting product can be directly shipped to the customer.

Reconex can be used directly in cigarettes or machine-made cigars. The product is stable and has a long shelf life. It does not easily turn to dust and has good aroma and burn characteristics. It can be added at the end of the primary process as it does not require additional processing. Flavors can be added if required.

In this way, a small primary’s capacity can be effectively enlarged simply by the addition of Reconex at the final process.

Tests show Reconex blends well and homogeneously. It stays in the blend until the final cigarette. Weight and density are similar to cut rag, allowing it to become an integral and permanent part of the cigarette blend.

EcO2 accepted a Golden Leaf Award in the most exciting newcomer to the industry category.

The company was established in 1996 when the Dutch government requested that an alternative method be found to methyl bromide, which was formerly used in the food and tobacco industries as a fumigant to kill stored-product insects.

EcO2 researched the issue until the end of 1999, at which point it was confident it had a method that worked and was ready to be launched as a commercial undertaking.

Its first commercial project came at the beginning of 2000, when it installed a controlled atmosphere (CA) treatment facility at a large international warehousing company in the port of Rotterdam.

Next, it built a complete container fumigation center in the port. The project earned the company a Best Life Environment Project award from the European Commission.

After gaining experience with food commodities, consumer goods, furniture, artifacts, packaging and other materials, EcO2 has recently started applying its treatment to tobacco beetles, which are increasingly resistant to the prevailing treatment, phosphine fumigation.

The CA treatment involves storing tobacco in an airtight room and then lowering the oxygen level to 0.5 percent for a certain period of time. In this way, all the stages of the beetle are killed—the adults and the larvae, which are relatively easy to deal with, as well as the eggs and the pupae, which normally present more of a challenge.

EcO2’s approach has generated considerable interest in the tobacco industry—and for a good reason: Tobacco beetles cost the industry an estimated $800 million per year.

NDC Infrared Engineering received a Golden Leaf Award in the most outstanding service to the industry category.

The company embarked on two major projects to address these issues—Infralab and the TM Series.

Infralab provides a secondary method to relieve labs of the quality testing burden. It requires only occasional validation against the primary method. Results can be obtained in seconds rather than hours. NDC launched its first Infralab analyzer, Infralab 5000, in the late 1980s. Over the years, NDC has worked to further improve simplicity of operation, ease of data capture and tolerance to conditions in various operating environments. Today the product is in its fifth generation, the Infralab e-Series, which is extremely tolerant to blend variations, reducing calibration maintenance requirements.

NDC’s tobacco-specific on-line moisture gauge, the TM series, is capable of measuring tobaccos from all over the world. It uses a single calibration slope and only requires adjustment on-line by trimming the calibration to the local reference method. For the customer, this means huge savings in time and money. The TM series is currently in its eighth generation. The TM710e is completely Ethernet-based, which opens up a realm of new possibilities, including remote diagnostics.

Regarding the future, NDC is looking beyond moisture. The company already offers nicotine and sugar analyzers and is developing on-line moisture analyzers that are not affected by blend top dressings and flavorings.

The BMJ most committed to quality award went to Vrijdag Premium Printing, which entered two of its products to illustrate its printing skills and technologies.

For the 2011 edition of the annual ProCigar Festival in the Dominican Republic, Vrijdag designed a vertical box in which the upright cigars are visible in a “staircase” arrangement. After the top lid is removed, the box unfolds to reveal both the cigars and the included cutter and lighter.

In producing the box, Vrijdag used advanced printing technologies, such as its gold bronze process and blind embossing. To prevent fingerprints on the box, Vrijdag finished the labels with a laminate. Each box has a high-security foil, a security cut and an individual number.

In addition to the ProCigar Festival Box, Vrijdag entered its I-Box into the Golden Leaf Awards competition. The I-Box showcases not only Vrijdag’s printing and finishing prowess, but also demonstrates what can be achieved beyond the traditional four-color printing process. With two magnetically shutting lids, the box’s contents represent Vrijdag’s four main markets—chocolates, cosmetics, spirits and, of course, tobacco. The interior contains an informational leaflet produced with the various techniques at Vrijdag’s disposal.

Andromeda Forwarding & Logistics once again took home the People’s Choice award. As evidence of the esteem in which it is held by its customers, the company submitted a large number of client recommendations with its entry.

Today, Andromeda is one of the most qualified and experienced providers of integrated supply chain solutions, combining air freight and ocean freight operations on a global basis.

Through its network of offices and agents in more than 100 countries, it strives to exceed customers’ needs by offering a range of logistics supply chain logistics solutions with quality, transparency, experience and high level of skills.

The Golden Leaf Awards were created in 2006 to draw attention to outstanding achievements in an industry that had become accustomed more to criticism than to recognition. Previous Golden Leaf Award ceremonies were held in Bali, Rio de Janeiro, Paris, Bangkok and Bangalore.

The next event will be held in Antwerp, Belgium, during the 2012 Global Tobacco Networking Forum.