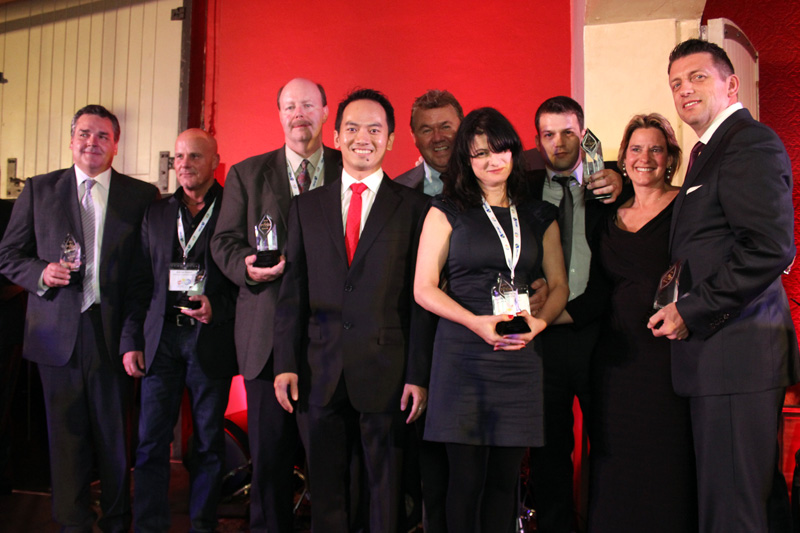 Tobacco Reporter presented its 2013 Golden Leaf Awards on Nov. 7 during a festive ceremony in Simon’s Restaurant at the famous Groot Constantia Vineyard near Cape Town, South Africa. The event was part of the Global Tobacco Networking Forum, which brought together hundreds of industry representatives and other stakeholders from around the world. Six companies received trophies in five different categories—with British American Tobacco and R.J. Reynolds Vapor Co. tying in the Most exciting new product introduction category.

Cigarette paper manufacturer BMJ, the exclusive sponsor of the Golden Leaf Awards, took the opportunity to introduce its new CEO, Omar Rahmanadi, and officially launch its new corporate logo and slogan, Eureka Everyday. Wine flowed generously during the evening, and Fred Vandermarliere of J. Cortès Cigars lifted the spirits even higher with a humorous speech about the cigar trade. The ceremony concluded with a performance from Hot Water, a South African band that has become an international sensation with its exhilarating mixture of blues, kwela, maskandi, rock and sakkie sakkie music styles.

Following are the winners of the 2013 Golden Leaf Awards, by category:

Alliance One Kenya won a Golden Leaf Award in this category for its work in reducing deforestation in Kenya. Kenya’s new constitution requires that forests should cover 10 percent of the country’s territory by 2030—the figure currently stands at 1.7 percent. Alliance One is playing its part by running an afforestation project with a target of 4 million trees per year. In addition, the company has been actively researching and developing alternatives to wood fuel for tobacco curing. Among other initiatives, it has invested in a briquetting plant.

BAT won a Golden Leaf Award for its BAT Toxicants iPad application. The app, which describes the results of BAT’s first clinical study of reduced-toxicant prototype cigarettes, aims to raise awareness of tobacco science in general and the research carried out at BAT’s U.K. R&D center in particular. It fits in BAT’s objective to be transparent about its research. Given the detailed background in the app regarding how toxicants are formed in smoke, BAT believes the app could also serve as an educational tool.

R.J. Reynolds Vapor Co. won a Golden Leaf Award for its Vuse digital vapor cigarette. Examining the e-cigarette category, RJR observed a high level of trial but a low rate of adoption, which the company attributed to poor product performance. RJR set out to develop an e-cigarette that would truly meet the needs and expectations of adult tobacco consumers. Equipped with a digital microprocessors and smart memory chip, the Vuse delivers the consistent and realistic smoking experience that has been lacking in other e-cigarettes, says RJR.

Most exciting newcomer to the industry

White Cloud Electronic Cigarettes won the Golden Leaf Award in the Most exciting newcomer to the industry category. Disappointed with the quality of existing e-cigarettes, the founders of White Cloud set out to develop a product using better design and technology, with quality control as the focal point. Since then, there have been five generations of batteries and four generations of cartridges. The company takes great pride in the quality of its products. Rather than focusing only on the initial sale, White Cloud seeks to build a strong, enduring relationship with its customers.

Most outstanding service to the industry

Andromeda Forwarding and Logistics won a Golden Leaf Award in the Most outstanding service to the industry category. Established in 1998 in Rotterdam, Netherlands, the company has evolved from a traditional international freight forwarder to a global provider of integrated supply-chain solutions for a comprehensive range of industries. Andromeda’s solutions combine air freight, ocean freight and trucking operations worldwide. The company specializes in warehousing, handling, sampling, storage and fumigation requirements in Antwerp. Andromeda Forwarding also offers customs clearance and brokerage, warehousing and distribution, insurance, rail transportation and barge transportation services.

BMJ most committed to quality

Seke took home the BMJ Most committed to quality category for its efforts to reduce the cost of oriental tobacco production in Greece. In 2010, the company pioneered sand seedbeds, which require little irrigation and no cultivation. Taking advantage of existing curing structures, this approach reduced the cost of production by 30 percent. Seke also invested in mechanization, introducing modified machines for the efficient hoeing of tobacco. Mechanization reduced labor costs associated with hoeing by 90 percent. It also decreased the quantity of fertilizer used.