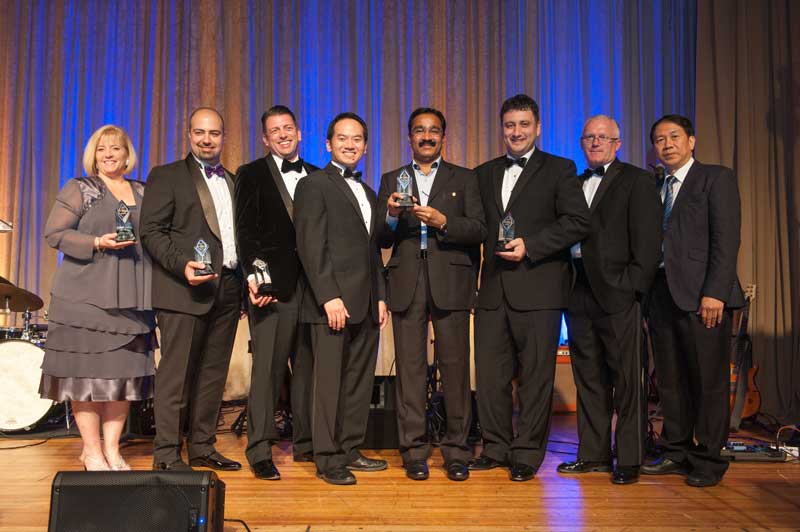 Tobacco Reporter presented its 2014 Golden Leaf Awards on Oct. 2 during a festive ceremony at The Greenbrier resort in White Sulphur Springs, West Virginia, USA. The event was part of the Global Tobacco Networking Forum, which brought together hundreds of industry representatives and other stakeholders from around the world. Five companies were recognized for their achievements in areas such as innovation, corporate social responsibility and commitment to quality. The Golden Leaf Awards are sponsored exclusively by BMJ of Indonesia.

Alliance One International (AOI) won a Golden Leaf Award in the Most outstanding service to the industry category for its Grower Management System (GMS), a standardized real-time global data-capture system.

The industry faces rapidly expanding reporting requirements, driven mainly by manufacturers and anticipated regulation. The source of much of this data is at the primary producer level.

Having access to such information in real time reinforces sustainable and compliant tobacco production. Through back-office functions, GMS will link with grower accounting systems, product-integrity programs and support traceability in the packed product. A derived benefit has been improved allocation of management and field staff time.

GMS was developed in-house. Microsoft certified the GMS app to be included in the Windows Phone Store in October 2012.

It is anticipated that GMS will also lend greater visibility to debt recovery, a critical parameter of the integrated production system, as a leaf supplier bears the principal risk with direct financing of growers.

GMS in current form is tobacco-centric, but readily lends itself to a much broader application in agriculture at large.

The Tobacco Board of India won a Golden Leaf Award in the Most impressive public service initiative category for its implementation of an electronic auction system, which has made the marketing of flue-cured tobacco in India more transparent and accountable.

With production of about 800 million kg, India is the world’s second-largest producer of tobacco, exporting leaf to more than 100 countries. The Tobacco Board is responsible, among other things, for ensuring fair prices to tobacco growers and establishing auction platforms for the sale of Virginia tobacco.

For many years, tobacco was auctioned manually in India. Despite its obvious success, the auction system had certain shortcomings, including susceptibility to human errors, lack of traceability and scarcity of information for stakeholders.

The Tobacco Board realized these problems could be eliminated only through quality communication aids, electronic auctioning and effective information management.

The e-auction solution was developed on a high-performance and reliable platform to effectively manage the automation process. The system has not only simplified the administrative procedures, but also removed any ambiguity by ensuring that, once recorded, the winning bid cannot be tampered with.

Not only farmers have benefited from the new systems. The large amounts of data generated allow buyers to make quicker and better-informed decisions.

Tomra Sorting Solutions won a Golden Leaf Award in the Most promising new product introduction category for its Opus Tobacco Sorter, which helps tobacco processors address a negative side effect of the increasingly popular mechanical harvesting.

Rather than relying on manual labor, tobacco growers are increasingly using machines to harvest tobacco. Among other things, this allows them to clear larger fields, thus increasing efficiency and productivity.

But mechanical harvesting also has a downside. Machines are less effective at removing leaf from its stalk than humans are. This can present a problem for tobacco processors and cigarette manufacturers. Because stalks are woody, they behave complete differently than tobacco stems when processed.

If not removed, stem stalks can turn to slivers during cutting, which in turn can pierce cigarette paper. The result is efficiency losses, drops in yield and possibly lower product quality.

Presented with this problem, Tomra capitalized on its experience in multiple industries, combining technology already used for tobacco applications with solutions it had developed for the food industry.

Shishapresso was recognized with a Golden Leaf Award in the Most exciting newcomer to the industry category.

While the cigarette industry has witnessed many innovations over the years, including mechanized production, the introduction of filters and special papers, the shisha business has remained largely unchanged. Today’s shisha smokers consume their tobacco in essentially the same way they did centuries ago.

Shishapresso is determined to change that. The company has developed a solution that eliminates the mess and hassle involved with the preparation of a hookah. Involving only three easy steps and a hookah, Shishapresso’s capsule and specially designed shisha ceramic head ensure a consistent smoking experience.

The Shishapresso capsules are filled with the finest shisha tobacco molasses, made from quality European Virginia tobacco leaves that are infused with quality flavors. Each capsule contains exactly the right amount of tobacco, the right texture and a unique foil-hole pattern. Smokers can select from 20 different flavors.

Shishapresso capsules are available in the U.S. and will be launched globally.

White Cloud Electronic Cigarettes won a Golden Leaf Award in the BMJ Most committed to quality category. While most e-cigarette manufacturers rely on Chinese manufacturing, which is cheaper due to lower labor cost and less-stringent government regulations, White Cloud is committed to setting up fully automated, U.S.-based operations.

In a major step toward that goal, the company relocated production of its e-cigarette cartridges entirely to the United States in May. Prior to that, the company was already sourcing and manufacturing its White Cloud e-liquid in the U.S.

The move to automation was made possible by the development of the company’s new proprietary cartridge, Cleardraw 2, which allows for automated production rather than the traditional hand-filling techniques typically used by companies in China. Automated filling in the end market promotes not only greater quality control and better regulatory compliance, it also ensures fresh ingredients.

White Cloud’s development in quality and innovation comes on the heels of the recent U.S. Food and Drug Adminstration (FDA) proposal for more stringent regulations within the e-cigarette industry. While the proposal was largely focused on marketing and age-restriction, it signaled a shift toward increased FDA control over e-cigarette production and manufacturing standards, which White Cloud believes makes automated production in the end market more important moving forward.