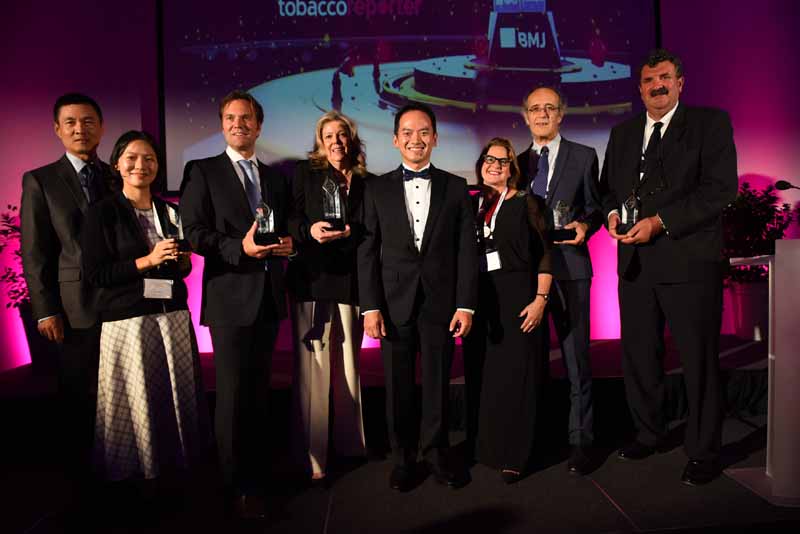 Tobacco Reporter handed out its annual Golden Leaf Awards during a ceremony at the Guildhall in London during the 2018 Global Tobacco & Nicotine Forum. Recipients accepted trophies for accomplishments in five categories: Most impressive public service initiative, Most promising product introduction, Most exciting newcomer to the industry, Most outstanding service to the industry and BMJ most committed to quality. The Golden Leaf Awards are sponsored exclusively by BMJ.

Universal Leaf Tobacco won a Golden Leaf Award in the “BMJ most committed to quality” category for its commitment to quality and excellence over the past century—the company celebrates its 100th anniversary this year.

As the world’s leading leaf tobacco supplier, Universal has long been a vital link in the global tobacco supply chain. In defining quality, the company’s perspective extends far beyond traditional considerations. For tobacco production to thrive, Universal believes that the supply chain must be preserved and improved through sound production and processing techniques, ethical business standards, and socially conscious programs.

That starts at the farm. Universal believes tobacco growers must be able to sustainably produce and profit fairly from their crops. The procedures and practices to accomplish this are unique to each origin, and the company’s local teams provide the necessary expertise.

At the other end of the supply, customers are increasingly demanding not only quality leaf but also compliant leaf. Compliant leaf requires the leaf supplier to confirm that tobacco is grown using good agricultural practices in a sustainable manner related not only to the environment but also to social concerns and grower profitability.

A critical component of Universal’s Good Agricultural Practices program is the Agricultural Labor Practices (ALP) program. ALP is designed to progressively address and eliminate concerns found in agriculture with child labor and other issues as well as to achieve fair working conditions on all farms from which the company contracts tobacco.

The company has invested significant resources in the programs and infrastructure needed to work with growers to produce compliant leaf and support its growers’ communities.

Alliance One International (AOI) received a Golden Leaf Award in the “Most impressive public service initiative” category for its efforts to alleviate water scarcity in Malawi.

A major producer of burley tobacco, Malawi is an important sourcing area for AOI. As a small country in southern Africa with a population of nearly 20 million, Malawi has only 1,700 cubic meters of fresh water per person available—a situation that is expected to worsen in the future due to rapid population growth and the effects of climate change.

Water scarcity is a factor in many problems, including food insecurity. Ninety percent of Malawi’s agriculture is currently rain-fed. Diversification into irrigation farming would allow farmers to grow crops in the dry season and secure additional harvests.

Alliance One Tobacco Malawi has been bringing water relief to its contracted farmers and the communities within its growing areas through village dams, boreholes and shallow wells, among other initiatives. These programs help farmers produce high-quality, well-irrigated crops as well as water for domestic use.

The projects have had a notable impact on AOI’s communities. The village dams, for example, have increased tobacco yields and financial returns by 10 percent and 20 percent, respectively, due to high-quality seedlings and early plantings. They have also allowed farmers to diversify into market gardening, increasing household incomes and food security. Livestock, meanwhile, has gained access to clean drinking water closer to grazing areas.

AOI estimates that a total of more than 125,000 Malawians have been positively impacted by its water programs.

Coresta received a Golden Leaf Award in the “Most outstanding service to the industry” category. For more than 60 years, the organization has promoted international cooperation in scientific research relating to tobacco and its derived products.

Headquartered in Paris, Coresta is engaged in determining best practices in agronomy and phytopathology with focus on sustainability. It also develops recommended methods for the measurement of crop protection agent residues in crops, physical properties of products, and chemical components in tobacco and smoke. More recently, it has also been working on such methods for e-liquids and aerosol.

The organization has been at the forefront of science relating to new product categories, with a special focus on reduced-risk products.

Examples of tools developed by Coresta include the monitor for smoking laboratory accreditation, the definition of vaping machine parameters and the unified Coresta unit porosity measurement for cigarette papers.

Coresta’s working groups allow each contributing organization to benefit from others’ input. Such collaborative work saves time and costs, enabling the industry to conduct studies that would be too expensive or time-consuming to be carried out by individual organizations.

Importantly, Coresta presents an opportunity to educate young scientists not only in their area of expertise but also in adjacent fields—something that would be difficult achieve in their normal daily work.

Robust science is an important foundation for the tobacco and vapor industries. Coresta is helping the industry develop this science, which is a crucial tool for engagement with stakeholders, especially those involved in developing the regulatory framework.

Feelm received a Golden Leaf Award in the “Most exciting newcomer the industry” category. Owned by Shenzhen Smoore Technology, Feelm has developed an innovative heating system for vapor products. This revolutionary technology combines a metal film with a ceramic conductor, a breakthrough in materials and structural science that represents a new frontier in the area of vapor atomization.

The metal film design creates an extraordinary broad heating surface that can accurately and intelligently apply temperature. This ensures instant vapor production along with a reduction in harmful substances, according to Feelm.

The Smoore Scientific Center comprises a research center, a research institute and a technology industrialization center. The organization employs more than 200 scientists who collaborate on the development and assessment of its atomization and heating platform. To date, it has secured more than 500 technology patents.

Smoore Technology has a large manufacturing base in China and works with large tobacco companies to produce Feelm pod systems for their devices.

Boikon received a Golden Leaf Award in the “Most promising product introduction” category for its Djura track-and-trace technology. Starting on May 20, 2019, manufacturers of cigarettes and roll-your-own products operating in the EU will be required to track and trace their products throughout the supply chain. The stipulation is part of the revised Tobacco Products Directive and aimed at reducing the prevalence of illicit trade.

Needless to say, this is an ambitious undertaking. According to the European Smoking Tobacco Association, tracking and tracing products in the EU will require monitoring the movements of around 29 billion packaging units per year. Requiring unprecedented data transfers and a robust IT system, the EU’s plan has sent manufacturers scrambling to reconfigure their factories.

Boikon of the Netherlands has developed an elegant solution that is efficient, secure and easy to install into existing production lines. Its Djura technology laser prints unique identifier codes on tobacco products and instantly registers them in the appropriate databases at a speed of up to 160 packs per minute.

According to Boikon, the system offers 99.98 percent coding efficiency and 100 percent reliability. Products with unreadable codes are rejected and codes can be reused immediately, which means the manufacturer gets to use all of its prepaid codes.

The technology’s finished-product coding is not only fraud resistant but also makes the system ready for the digital tax stamps contemplated by regulators.

With its reliability and flexibility, the Djura will help tobacco producers comply with the looming EU legislation.