Amid many changes in the market for primary tobacco machinery, one variable remains constant: demand for quality.

Demand for tobacco industry primary department equipment (PDE) is stable, according to Lorenzo Curina, sales director at Godioli & Bellanti. And if anybody is qualified to assess the situation, it is Curina, who has been involved in the business for more than 40 years.

I guess that stability is the best that can be hoped for given the trend to tobacco manufacturing consolidation and the decline in tobacco consumption, which is now basically a global phenomenon. In fact, you have to wonder whether things aren’t looking less than stable for some of the companies not so firmly established as Godioli & Bellanti, which has been in operation since 1923.

I started to wonder about this after being asked to write this story on PDE. I sent out 20 emails to companies listed in the Tobacco Reporter Buyers’ Guide as supplying this type of equipment, three of which were not delivered, possibly because the companies are no longer in business. Of the 17 that reached their targets, only six elicited replies, leading me to surmise that PDE is not a major part of the activities of up to 11 of the companies. Of the six companies that replied, only one, Godioli & Bellanti, followed through and provided information. One withdrew because the company was not currently involved in PDE, one withdrew because of unforeseen circumstances and three faded out of the picture.

This does not amount to evidence of the imminent demise of the PDE business. Indeed, one interpretation of what happened is that some of these companies were so busy going about their day jobs that they had no time for peripheral activities. But it tends to give support to other speculation.

For instance, as mentioned above, the consumption of cigarettes is falling around the world and is likely to keep falling, especially given that, outside China, the four major international tobacco companies are actively or passively promoting the demise of smoking. They are saying that people should give up smoking and/or are providing next-generation products to make the transition away from smoking easier. And while it is conceivable that these new products might fail, it is inconceivable, I think, that, even in this case, smoking will be allowed to reassert itself. While governments are often beholden to big business, as can clearly be seen from the failure to confront environmental destruction head on, most governments cannot be seen to be in the pay of the tobacco industry.

Of course, smoking still underpins a huge business, and providing products for that business requires and will require for a long time the operation of primary processing departments within cigarette factories and other facilities. However, we must assume that the number of factories outside China—and probably inside China—is shrinking as consolidation takes an ever-stronger stranglehold on the tobacco industry and that this trend will continue.

It is true that the remaining factories will need to be kept going, but PDE suppliers have long said that their equipment is long-lasting, and the fact of the matter is that much of this equipment comprises large pieces of metal that can be altered or refurbished by nonspecialized engineering companies operating in the locality of the factories, which can also supply the sorts of parts needed regularly or from time to time, including V-belts, pulleys and electrical motors.

But at this point, I need to insert a rider to stop people clogging my inbox with complaints. While PDE comprises much steel, it also includes some very sophisticated technology. In fact, Curina told me that while primary processing lines had always been characterized by high-quality design and materials, it was his observation that quality was now even more important than it was previously.

It is difficult to know what exactly the PDE developments being requested by tobacco manufacturers are because Godioli & Bellanti provides equipment that is customized for each client and the details of which are confidential. However, Curina said that, generally, manufacturers were looking for “innovative proposals.” They were paying particular attention to process controls and automation with much attention to safety and traceability. And they were going to great lengths to avoid contamination, requiring certification for such things as PDE component materials.

Demand for PDE, like demand for many other things, depends on a whole range of issues, including the need to renew equipment in line with a cyclical schedule that maintains processing at as close to the optimum level as possible. At the same time, innovative interventions will spur demand, though not always completely successfully. Fifteen to 20 years ago, attempts were made at upping the automation levels of primaries, but these were not entirely successful, especially in regard to reducing labor head counts—automation being largely about improving productivity along with efficiency, flexibility and safety.

Because tobacco is a natural product, there was a need for experienced people who, from time to time, could touch the tobacco, examine it visually and smell it, and these were tasks that were not possible to automate. It is likely, I think, that it would now be possible to automate these functions, or some of them but probably, with the exception of certain aspects of visual inspection, at a cost beyond anything justifiable in respect of the traditional primary processing of tobacco in the 2020s.

Even 10 years ago when the industry was only edging toward reduced-harm products, the time would probably not have been right to invest heavily in unproven technology, whether that technology was concerned with leaf processing, primary processing or secondary processing. After all, though the tobacco industry has lived with uncertainty for many years, such uncertainty had reached unprecedented levels, and even seemingly everyday events, such as tax increases, could cause the value of investments and innovation to be called into question. Today, in some markets at least, uncertainty is the only certainty.

And 10 years ago, the industry seemed to be heading in other directions. Outside of China, the trend was toward shorter run products, some of which had to be manufactured without the flavors that were once possible to add. The trend to shorter runs clearly impacts the speed at which a manufacturer can operate its secondary machinery given that speed and flexibility are not always the best bedfellows. In the primary, meanwhile, this trend is reflected in a need to produce smaller amounts of cut rag. Hence the arrival of mini primaries and microprimaries for the processing of small batches of leaf.

In fact, demand for new but traditional PDE can at times be squeezed from both ends. At the top end, if you like, there are the sorts of changes demanded by the manufacturing needs of HnB products and whatever tobacco-containing products that come next while at the other end, especially in straitened times, manufacturers have the opportunity to refurbish their existing machinery or buy secondhand, possibly refurbished equipment. In an issue of Tobacco Reporter published at the end of 2010, the point was made that at that time, there was a good demand for reconditioned primary equipment. In part, of course, that demand was probably down, directly or indirectly, to the global financial crisis that was then in full swing. But it was no doubt also due to the fact that key pieces of such machinery were often made of stainless steel, which meant they were built to last, so donor equipment was relatively easy to refurbish. Of course, refurbished cutters have always been in demand as has refurbished equipment in general in countries that apply high tariffs to the import of new machinery.

But could the refurbishment of existing primary equipment explain any fall in demand for new equipment that might be happening now? It’s difficult to say, but one of the points made in that story 10 years ago was that if the then-current demand for refurbished primary equipment were maintained, the likelihood was that the supply of donor equipment would dry up, especially the supply of donor equipment that could be obtained at a cost that would allow the refurbisher to sell on the equipment and still make a profit.

Finally, in respect of the large-scale primaries that still process the largest volumes of leaf tobacco, the perennial question that crops up is whether it is better to design leaf processing equipment in Europe or the U.S. and construct it elsewhere or whether it is still worthwhile to ship often bulky pieces of finished machinery around the world. Usually what you are told is that it depends on the policies of the manufacturer buying the equipment and their attitude toward machine longevity/quality, on the technical specification of the particular piece of equipment, on the cost of freight and on the tariffs applicable in the country where the equipment is to be shipped. But perhaps, as Curina made clear above, the emphasis is really on machine quality, including its technical specifications. It is significant, I think, that the company that responded to this feature told me that it ships its equipment around the world from its base in Italy where labor costs are not low. 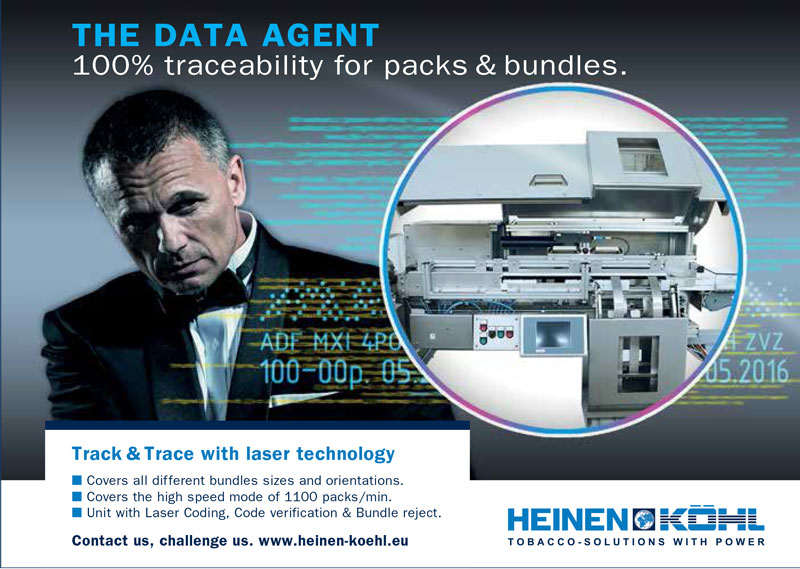