A new book explores the architectural heritage of tobacco. 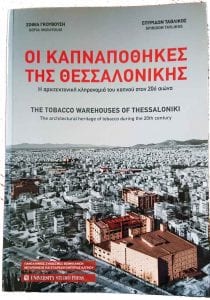 If you have to spend time waiting in the reception area of a company operating at some level within the tobacco industry, chances are there will be available to you a number of publications, most of which will comprise newspapers and magazines that specialize in business and financial matters, and, if you’re right out of luck, a couple of dog-eared annual reports and faded promotional brochures of the company you’re visiting. Not so long ago, however, the mix of publications available for perusal would probably have been broader and would have included some coffee table tomes illustrating various aspects of tobacco and its peripheral industries. At that time, most tobacco companies had libraries varying in size from a couple books to hundreds of books, and at least one had a librarian, but I suspect that few now have such facilities, and I know that at least one fair-sized library was cast aside in the name of “efficiency” and “progress”—read: cost-cutting.

Of course, it is not possible to take the moral high ground here. While the business publications available now tend to peddle only a gratuitous version of business, many of those coffee table tomes of yore also largely told stories that businesses wanted to get across: picture-based tales of smiling farmers working in sunlit uplands, who, in reality, even if they could have been considered to be tobacco industry stakeholders, more often than not simply wound up with splinters in their hands.

But relief is at hand with the publication of a fascinating book that will appeal to those focused on the tobacco industry, those with specialized interests that include but transcend tobacco, such as architects, historians, economists, town planners and sociologists, and those simply possessed by a natural curiosity: The Tobacco Warehouses of Thessaloniki: The Architectural Heritage of Tobacco During the 20th Century.

Indeed, if it is placed in reception areas, visitors might be tempted to slip this book into their briefcases as they leave. I say this because while the book’s title is somewhat formal—its contents are based largely on an academic study—it can be entertainingly educational—for example, when the basement of a warehouse designed in 1956 and completed in 1959 is described as having been designated for use as an air raid shelter under the applicable regulations of that time.

The book, which is in Greek and English, is in A4 format and, with 450 pages, weighs in at 1.6 kg (so only the more muscular visitors will be able to slip it into their briefcases).

Following forewords by Nikos Allamanis, who is president of the board of directors of the Hellenic Association of Tobacco Processing and Trading Industries (HATPTI) and well known to readers of this magazine, and by Olga Traganou-Deligianni, architect emeritus of the Ministry of Culture, the book is divided into chapters on the historical background of Thessaloniki and Greece’s leaf processing and global trading industries; the development of the necessary warehouses and processing facilities; an architectural analysis of those buildings; and, by far the largest chapter, illustrated descriptions of those buildings, their ownership and the ways in which they were used.

The book is worth reading, or just dipping into if you’re in a reception area, simply for the history it provides about an industry that played a huge role in the economy of Thessaloniki—for a long time the main port for Greek tobacco exports—and Greece as a whole. Some of the history will be familiar to many readers: the boost given to the industry by Greece’s accession in 1981 to what was then the European Economic Community and the blow that was delivered to that industry in 2006 with the EU’s changes to its agricultural subsidies. Meanwhile, some of the history will be familiar, I should imagine, only to those with a close association with the Greek tobacco industry. For instance, the fact that it was the first wave of warehouse development, which occurred during the period from 1923–1939, that turned Thessaloniki into the most important Greek tobacco center. But some references will surely be new to all but a few. Apparently, between 1573 and 1589, two French importers grew tobacco in the suburbs of Thessaloniki.

The Greek tobacco industry was built by a large number of family businesses that formed and were supported by regional associations. In such a competitive environment, what had been labor-intensive operations increasingly became mechanized, and, gradually, consolidation reduced the numbers of both businesses and associations. The industry changed from being a large number of small enterprises to a small number of large enterprises with the inevitable result that many warehouses became surplus to requirements.

And in this regard, while the book is of much historical significance, more importantly perhaps, it tells of a living history in which those fighting to preserve an important industrial heritage seek to rally support from citizens, warehouse owners and government institutions. The authors of the study on which the book is based, architects Sofia Gkouvousi and Spiridon Tavlikos who were supported and helped by the HATPTI, describe 88 warehouses in Thessaloniki, some of which no longer exist, some of which are in need of redevelopment and some of which have been reconfigured already to provide such things as commercial and office space, craft units, hotels and storage.

Is it worth the effort? Would it not be better to pull down the old and build anew? Having wandered through the book and some of the streets on which those warehouses stand, I would have to come down on the side of preservation where this is practical. For one thing, I would guess that the damage caused to the environment in reconfiguring a building would generally be less than demolishing and rebuilding. But there’s more to it than that. The operation of those warehouses not only provided work opportunities, social cohesion and economic prosperity, but their design and style also heavily influenced the buildings around them and therefore provide a link and a signpost to the past, a solid grounding of the present and perhaps even a pointer to the future.

The Tobacco Warehouses of Thessaloniki: The Architectural Heritage of Tobacco During the 20th Century is published by University Studio Press.