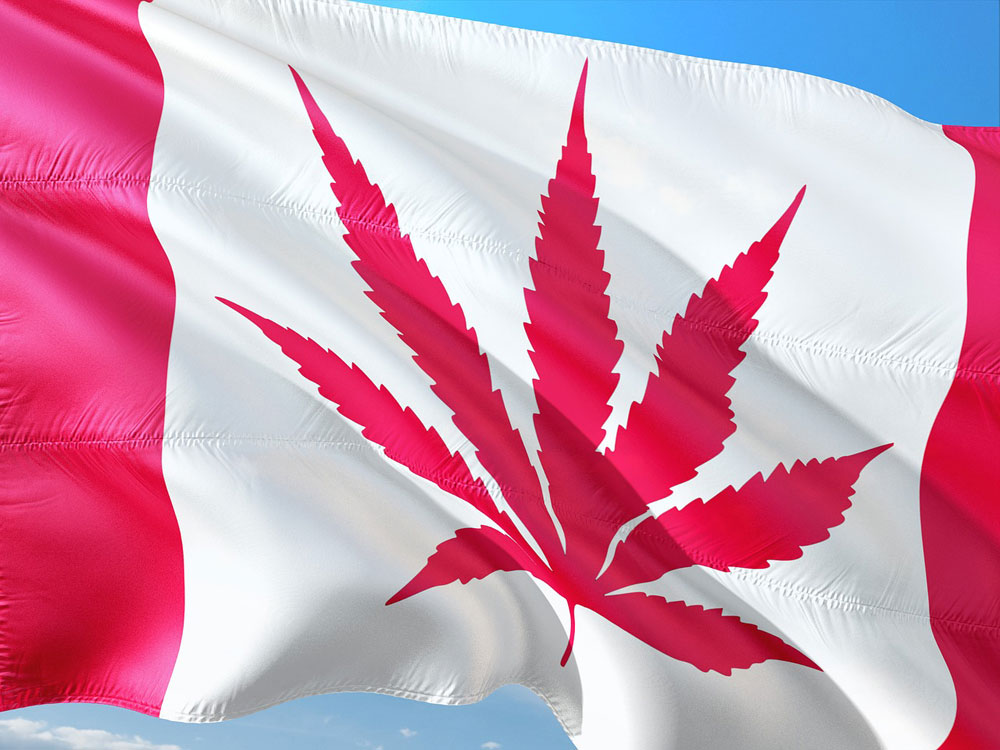 Seventeen months after legalization of recreational cannabis in Canada, ecstasy has given way to disillusionment. When pot officially became legally available on Oct. 17, 2018, it created a booming new industry. As of July 2019, it had contributed $8.26 billion to Canada’s economy and created around 9,200 new jobs, according to Statistics Canada. Investors were in a gold rush mood. In autumn 2019, however, marijuana producers were sitting on 400 tons of unsold weed, enough to cover two and a half years of demand, the Financial Times reported. Share prices were tumbling, as were prices for legal cannabis, and producers announced production and job cuts.

What had gone wrong? Canada’s government had the best intentions when it passed the Cannabis Act (Bill C-45), thereby becoming the second country, after Uruguay, to legalize recreational cannabis for adults nationwide. The move was meant to take the product out of the black market, to protect public health and to keep cannabis out of the hands of youth. The law controls and regulates marijuana production, distribution and sale. By establishing standards for its legal manufacture, users would have access to a safe product without unknown additives. And, of course, recreational marijuana offered an additional opportunity for the government to collect tax revenue.

“Ending a criminal law abstinence-only approach to drugs is a good idea,” says David Sweanor, an industry expert and chair of the Advisory Board for the Center for Health Law, Policy and Ethics at the University of Ottawa. “The War on Drugs has been monumentally unsuccessful and hugely costly in terms of enforcement and societal harm. But the goal of taking a public health approach on cannabis in Canada was sidelined by politics. Instead of ending a criminal law approach, there were simply a few rather confusing—especially to those most likely to use the product—exemptions made to a prohibitionist approach.”

Free to get high

Bill C-45 stipulates that people age 18 or older may possess up to 30 grams of dried cannabis or an equivalent nondried form. The Canadian provinces and territories regulate and tax cannabis individually, as they have been doing with alcohol and tobacco, and may further restrict possession, sale and use. Except in Manitoba and Quebec, each Canadian household is allowed to cultivate up to four marijuana plants from seed or seedlings licensed by the government. Edibles and vapor products containing pot, termed “Cannabis 2.0,” were introduced in a second phase of legalization in late December 2019. Procedures for retail sales vary between provinces and depend on whether outlets are privately owned or run by the provincial government.

Anyone who wants to become involved in the marijuana business—be it in cultivation, processing or selling, analytical testing, or research—must obtain a license from Health Canada. The arduous multi-month procedure turned out to be one of the major reasons why legal cannabis found its way to consumers only slowly during the first year after the act was implemented. Throughout Canada, legal sales take place at retail outlets or through the mail. Health Canada, however, lagged behind in issuing authorizations, with a reported backlog of more than 800 cultivation, processing and sales license applications at the beginning of 2019. As a result, physical dispensaries for legal cannabis have only been rolled out slowly in several Canadian provinces, thus turning the legal distribution channel into a bottleneck that is likely to persist for some time. In Ontario, the country’s most populous province with more than 14 million people, 24 licensed marijuana stores had opened one year after legalization, which corresponds to one shop for every 604,200 residents. “The provinces, overall, seemed overly interested in revenue opportunities, poorly equipped to offer consumers a better option than the illicit market, and bad at business,” says Sweanor.

Competing with the black market

Several other factors contributed to the sluggish transition from illegal to legal sales. Canada has introduced a special excise tax of 10 percent on cannabis, which makes it difficult for legal producers to compete with black market dealers on price. Third quarter 2019 data published by Statistics Canada found that the average per gram price for legal marijuana stood at cad10.23 ($7.73) compared to cad5.59 for illicit pot. Legalization proponents hope that the price differential will diminish as costs for legal cannabis production decline once economies of scale kick in. “But the illicit market has been very entrepreneurial,” Sweanor explains, “and the legal market has to date not been a very effective competitor in much of the country.”

Although cannabis regulations don’t include a firm limit on how much tetrahydrocannabinol (THC), the main psychoactive component in cannabis, products may contain, the bulk of marijuana products available on the market are believed to have a lower THC content than what consumers could buy on the black market. Furthermore, with hundreds of illegal marijuana dispensaries, cafes and lounges across the country, Canada already had a functioning illicit cannabis supply infrastructure for years that did not disappear with legalization. At the same time, strict marketing controls on legal dope limited the ability of legitimate businesses to lure cannabis consumers away from their established and trusted illegal sources.

“There has not been a sufficiently viable offer in terms of relative safety, price, availability, acceptability, etc., to cause a market transition similar to what was seen in the move to sanitary food, science-based pharma and other historical transitions to regulated industries,” says Sweanor.

While hard to monitor, the value of the cannabis black market was believed to be $3.2 billion in 2019 compared to a $1.9 billion legal cannabis market, according to the Financial Times. Analysts estimated the size of the legal market to triple within the next five years, however, thus taking away at least $1 billion from illegal drug dealers.

When evaluating Canada’s shortcomings in its legalization of marijuana, it’s important to remember that the country entered largely unchartered territory. Nevertheless, the government could have considered the experience of U.S. states with regard to a number of issues it didn’t consider in its final lawmaking, such as the social justice and equity components related to legalizing a former drug. The Cannabis Act fails to provide amnesty to around 500,000 Canadians who have criminal records for dealing with cannabis in the past. California, by contrast, allowed for the expungement of past cannabis convictions when it legalized marijuana.

Canada’s legislation also fails to provide social equity programs as were introduced in Massachusetts, for example. Such programs provide communities and people who have been disproportionately harmed by the War on Drugs with the opportunity to participate in the legal marijuana industry. Nor does the law reserve a portion of the cannabis revenue generated to support such impacted communities.

“I think this is part of the overall issues on replacing a War on Drugs model with something focused on public health and human rights,” says Sweanor. “That will require additional political will and further regulatory change but will also likely require a more informed global discussion on international protocols that make it very difficult for a country like Canada to simply accept that the War on Drugs was a terrible policy and to enact a public health-focused alternative.”

On the production side, the Cannabis Act has also sparked debate. The law intended to enable small-scale production of cannabis but unrealistically demanded that applicants for a license already have a manufacturing facility in place. In the blink of an eye, Canada’s cannabis market became dominated by a small number of large corporations—marijuana startups in which bigger players from other sectors, most notably the tobacco and alcohol industries, had bought into. “They were almost certainly massively overvaluing those companies,” Sweanor points out. “There are still options for small-scale cultivators but also open flouting of the law by illicit growers. Though hard for some policymakers to accept, it would have likely made sense to make the illicit growers part of the solution rather than put them in direct opposition to the government’s plans.”

Although Canada will have to fine-tune its cannabis legislation, it has certainly achieved one thing: The stigma surrounding pot has been erased quickly. “The idea of this being positioned as a public health issue and a way to counter the illicit trade was eclipsed by messaging from media that essentially said, ‘party time!’” says Sweanor. “That was undoubtedly a message that played well with much of the public but likely encouraged more use rather than safer use. Marijuana use was already common before the law was changed, but I now witness it in different sorts of places, such as middle-aged patrons standing outside a high-end restaurant.”

Canada now serves as a role model for other states seeking to introduce legal marijuana for recreational purposes, such as Luxembourg (see “Luxembourg, Loaded,” Tobacco Reporter, February 2020). “Ideally, other countries can leapfrog Canada by following a model closer to what Portugal has done on drugs,” says Sweanor.

Portugal has not legalized any drugs but has decriminalized use and possession of all drugs in a way that moves the focus from criminal punishment to treatment. “The casualties, both individual and societal, from trying to conduct a War on Drugs have been catastrophic,” says Sweanor. “A humane and pragmatic public health orientation with ongoing monitoring should be the goal. The problems faced in changing cannabis regulations should stand as a warning to governments about the deleterious impact of making laws during an orchestrated moral panic. The lessons of the War on Alcohol were not heeded as countries embarked on the War on Drugs, and we are now seeing the same process in a War on Nicotine. We need to heed the advice President Obama gave on foreign policy: ‘Don’t do stupid shit.’”