While vapor products are considered to be less hazardous to users’ health than combustible cigarettes, the impact of their waste products on the environment may become just as harmful. Currently, cigarette butts are the most littered items in the world. Since the 1980s, they have consistently made up 30 percent to 40 percent of all items collected in annual international coastal and urban cleanups, amounting to an estimated 4.5 trillion cigarettes annually being discarded worldwide, according to the Truth Initiative, a U.S. not-for-profit tobacco control organization. Thrown into the environment, they leach nicotine and heavy metals while their cellulose acetate filters take up to 10 years to degrade (also see “Minimizing impact,” Tobacco Reporter, April 2019).

Due to their complex construction, e-cigarettes entail additional perils for the environment. When littered, broken vape products can ooze dangerous metals and battery electrolytes, not to mention nicotine liquid, which is toxic. The remaining plastic parts of the device take an estimated 450 years to decompose—If they disintegrate at all. Studies have shown that they break into micro particles by atmospheric conditions over time. The individual components of e-cigarettes belong in different waste categories, which can make proper disposal challenging.

In the U.S., the world’s largest vape market with a value of $6.4 billion in 2019, according to Statista, the legal situation for the appropriate disposal of vaping devices is complex and inconsistent. Most devices sold don’t include instructions on how to dispose of them correctly.

In the wake of vaping’s growing popularity among teenagers, littering of used e-cigarettes has become a serious problem for U.S. high schools. As students are prohibited from smoking or vaping on school grounds, they tend to do so in surrounding areas, often throwing away their discarded vape pens and cartridges as carelessly as they would cigarette butts. Schools collect the used items, which makes them “generators” of waste under the U.S. Resource Conservation and Recovery Act (RCRA).

To aid the schools in their thankless new responsibility, the Public Health Law Center (PHLC), a tobacco-control organization, in December 2019 published a guideline on how to properly dispose of e-cigarette waste. As generators, the RCRA requires schools and other institutions such as airports and courts to comply with special handling requirements, which, among other things, include that they notify their hazardous waste regulatory entity and fill out a special form to obtain a U.S. Environmental Protection Agency (EPA) identification number.

They are also required to inspect the hazardous waste on a weekly basis to make sure that there is no leakage. Nicotine, be it in the shape of a liquid or salt, is a listed hazardous waste under the RCRA. The law requires generators to ship the waste storage containers, which are not permitted to remain on site for more than 90 days, to a properly permitted hazardous waste treatment, storage or disposal facility. “While recycling the e-cigarettes would make them no longer subject to RCRA hazardous waste requirements, the problem is that, to date, no network of legitimate recycling facilities that recycle nicotine for later reuse appear to exist,” the PHLC states in its publication. “The additional burden on public institutions can be overwhelming.”

By collecting e-cigarette waste, institutions also become generators of lithium-ion batteries as they are found in rechargeable e-cigarettes. Despite their risk of fire or explosions, the batteries are not required to be stored and disposed of in the same strict manner as nicotine waste. The RCRA treats them as “universal waste,” but at the state level, hazardous waste regulatory agencies have developed different standards on how to treat them.

If used or disposed of outside one’s residence and/or accumulated by a public entity such as a school or a business, federal law uniformly treats vapor products as hazardous waste. Should students dispose of their used items at home, however, the situation is different: Under federal law, vapor devices are consumer products designed for use at a consumer’s residence in their residence and can therefore be discarded by them as nonhazardous waste. Instead, they qualify as “hazardous household waste,” which again is subject to state regulation.

To facilitate matters for their customers, several U.S. vapor companies have introduced voluntary take back programs, although some later discontinued these initiatives. Juul, which leads the U.S. vapor market with a share of around 75 percent and, according to the U.S. Centers for Disease Control (CDC), sold 16.2 million devices in 2017 alone, currently has no such program. “We are committed to developing effective, innovative and sustainable solutions,” the company told Tobacco Reporter. “We look forward to launching further takeback and recycling pilot programs in the future. In the meantime, we suggest consumers recycle their Juul devices with other electronic waste which contain lithium-ion polymer rechargeable batteries. Juul pods are not intended to be refilled and we ask consumers to not litter.” 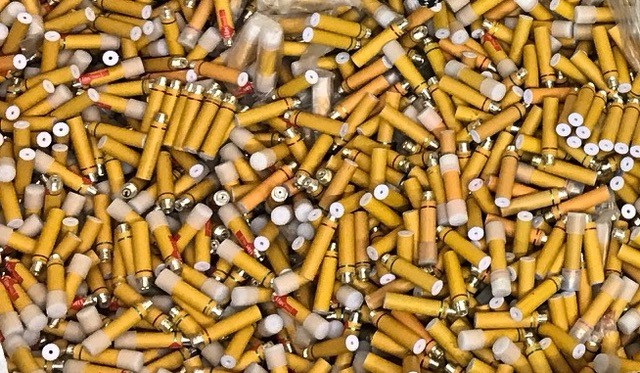 Regulation is clearer in the world’s second-largest vape market, the United Kingdom, where e-cigarette sales accounted for $3.2 billion in 2019, according to Statista. Despite the country’s departure from the European Union (EU) in January, it remains for the time being subject to EU laws, such as the Waste Electrical and Electronic Equipment (WEEE) regulations, which entered into force in 2014. The law aims to reduce the amount of electrical and electronic equipment ending up in landfills as hazardous materials can contaminate water and pollute soil, and the amount of landfill space in Europe is limited.

The WEEE directive sets recycling and recovery targets and requires manufacturers and retailers to assist in the collection of WEEE for recovery and recycling. Manufacturers pay an annual fee for the safe collection and recycling of electrical waste products. End-users are obliged to dispose of such products not as part of regular household waste, but by dropping them at a dedicated e-waste reception location. This can also be a retailer of electrical or electronic products as long as their shop has a certain size, or the manufacturer. To indicate that a product is required to be discarded under WEEE rules, it is marked with the image of a crossed-out wheelie bin. In 2019, a German court prohibited Juul from selling in Germany because its products lacked this symbol.

Every year, U.K. households and businesses discard an estimated 2 million tons of WEEE items ranging from washing machines to automatic money dispensers, according to the U.K. Health and Safety Executive. At present, vapor products account for only a small share of one of WEEE’s 10 broad subcategories. Listed among small household appliances, they are not even separately mentioned.

Despite differing regulations, vapor product waste is submitted to similar treatments in the U.S. and the EU. “Most vape product waste, inclusive of the batteries, goes through high-temperature incineration (HTI), which means it is incinerated at 1,000+ degrees Celsius,” explains Rob Smith, owner and operator of RS Recycling Ltd, a U.K.-based company that offers destruction and brand protection services for the secure disposal of commercially sensitive, difficult, dangerous or classified waste streams. “The heat will destroy the item completely and largely reduce waste volume. There is very little residue—typically 10 [percent] to 20 percent of the inbound waste volume is outbound as an inert ash.”

In 2017, Smith was engaged by Valpak, a leading U.K. environmental compliance scheme that manages the recycling obligations of more than 5,000 U.K. businesses, to research ways of recycling vapor products. The results were sobering, Smith explains. “Recycling an e-cigarette is possible, but it’s very, very expensive. It’s a very small and tricky waste stream. If restricted to a single country, there’s a disproportionate relation of cost and R&D efforts to recycle these products.”

One reason for this is the vast variety of vapor products. In 2017, the CDC counted 565 different types of e-cigarette devices in the U.S. market, 184 of which were disposable or single-use products. While the trend has since shifted toward reusable systems, market research companies nevertheless expect disposable products to remain on the market. It was these “cigalikes” that Smith studied. “The batteries are incredibly difficult to remove from the device, and they are all made differently,” he says.

“The way they are manufactured is that the battery is tightly packed in the stem, which requires a lot of force to remove. The majority of devices are manufactured in China using lithium-ion polymer batteries, which are soft and easily damaged—around 1 [percent] to 1.3 percent of the batteries failed during removal with the possibility of catching fire if not properly dealt with by the recycler. The majority of fires in WEEE treatment facilities are thought to be caused by batteries being crushed, split or otherwise broken, or by arching and igniting surrounding combustible WEEE material,” says Smith.

Battery recycling is all about recovering the rare and valuable metals used for their production, most notably lithium and cobalt. The batteries used in vaping devices, however, are only about one-sixth the size of batteries installed in smart phones, so the commercial viability of recycling them needs to be considered.

Recycling a single-use e-cigarette, Smith points out, is about 20 times more expensive than burning it. “The question is whether manufacturers are willing to bear the cost,” says Smith. “There are no mechanical means currently available to take the battery out of the stem; hence a lot of costly manual labor is involved. The disposal of the nicotine liquid is also relatively expensive. Besides, there are toxic issues around that. Typically, WEEE treatment facilities are not used to dealing with hazardous toxic liquid—they have expertise in treating refrigerating gases or mercury dusts and residues, but the toxic liquids in e-cigarette cartridges present a different type of hazard and risk. Even touching the liquid with exposed skin is quite harmful.”

Reusable closed and open systems are much easier to recycle, Smith says, because they have replaceable battery packs. “Batteries tend to be stacked or are built-in in large blocks in these devices. The devices will be broken up by the conventional WEEE process, where a chain mill is used. The machine can smash the vape product so that the battery comes out and the tank can be detached from it, which makes recycling easier.” He adds that the volume of vapor products that need to be recycled is still relatively small, which hampers development of respective recovery processes. “When there are large volumes of a certain waste, it’s more likely that recycling processes are designed for them.”

Sweeep Kuusakoski, a leading WEEE processing facility in the south of England, is currently working on a large-scale recycling process for nicotine pods. The firm is a forerunner in this field, according to the company’s commercial manager, Justin Greenaway. “Working with e-cigarette responsibilities, we understand that the marketplace needs a recycling solution,” he explains. “We have already perfected the removal of batteries, using chain mills and a manual process for the disassembly of devices. Now we design a process for the cartridges to remove nicotine residue, wash out the remainders and recycle the pods.”

The retrieved nicotine fluid will be incinerated. The company had previously developed a similar system for toner cartridges, according to Greenaway. “Nevertheless, it’s a challenging task for us,” he says. “We are still experimenting, but we plan to have the process ready in three months’ time.”