Perhaps the most successful iteration yet, the 22nd Habanos Festival featured many highlights.

Cuba’s Habanos Festival is unlike any other tobacco celebration in the world. The event highlights the Cuban people and their culture on a grand scale. Cuba is a complicated place, but its people’s love for their country is undeniable. The festival conveys that affection perfectly.

Held Feb. 24–28 in Havana, Cuba, this year’s festival focused on the Bolivar, Montecristo and Romeo y Julieta brands. The 22nd edition of the Habanos Festival may well be remembered as one of the best. First-time attendee Fritz Bossert, regional director for Universal, said he had never seen anything like the Habanos Festival in his more than 40 years in the tobacco industry. “This is quite remarkable,” said Bossert. “It is something every cigar connoisseur should experience.”

The Habanos Festival is exclusive. It sells out in minutes once registration opens online. This year, only about 350 cigar lovers from 70 countries were able to secure tickets. There was a noticeably smaller Chinese contingent this year, presumably due to travel restrictions because of the coronavirus. When asked about the impact of the virus on Habanos sales, Leopoldo Cintra Gonzalez, commercial vice president for Habanos, said that it’s too early to tell.

“This coronavirus could have an impact, but we still have to wait before we understand what that impact will become,” said Cintra Gonzalez. “We have to depend on the global sales in the 40 countries [in which] we distribute, and we hope this coronavirus ends soon. However, we believe any impact could be compensated for by sales in other regions.”

Several cigars were launched during the festival. Romeo y Julieta, born in 1875, celebrated its 145th anniversary and launched its most prestigious line to date: Linea de Oro. The Montecristo brand celebrated its 85th anniversary with the launch of a new vitola: Montecristo Herederos. Partagas celebrated its 175th anniversary with the release of its limited edition: Partagas Legado, coupled with a humidor crafted by the DECUBA group. Bolivar released its exclusive Belicosos Finos Cosecha 2016, “whose strength distinguishes the quality and brand with a three-year aging process,” according to Cintra Gonzalez.

The festival opened on a Monday with a press event that updated the nearly 200 journalists from 35 countries on the previous year’s sales of Habanos S.A., the entity responsible for marketing Cuban cigars worldwide. In 2019, Habanos earned more than $531 million, a 2 percent increase over 2018, according to Cintra Gonzalez.

Habanos currently ships about 145 million sticks worldwide every year. Europe accounts for 53 percent of sales while Asia had a decrease of 3 percent to 4 percent (China has grown by 10 percent for both 2017 and 2018). Spain grew by 4 percent as did the Africa market. Sales in Canada and South America grew by 5 percent in 2019 while the Caribbean grew by 9 percent. The biggest customers of Habanos are Spain, China, France, Germany and Cuba. “We are very careful about performing research, and we offer many products that are showing to be dynamic performers in the market,” said Cintra Gonzalez. “We have been increasing both production and sales in our 40 markets [in which] we distribute.”

The Habanos Festival is traditionally accompanied by a trade fair. This year, there were 239 exhibitors from different regions, including Italy, Germany, Spain, Panama, Mexico, Costa Rica, Colombia and Cuba. Cuba’s representation at the trade show grew by 5 percent over last year, according to Cintra Gonzalez.

The Monday evening event was hosted by Club Habana on the western side of Havana. Opened in 1928, the location is quite captivating with its massive front yard and an even larger area behind the historic main building that seemingly flows right into the ocean. The evening’s circus-like theme was unique and imaginative.

Following a welcome by the co-presidents of Habanos, Inocente Nunez and Luis Sanchez-Harguindey, Cintras Gonzalez told attendees that the inaugural evening would be dedicated to the Bolivar brand that “due to its strength and personality is no doubt the favorite of the most demanding Habanos smokers.”

After the speech, a presentation was shown on a giant, round, balloon-shaped screen. Suddenly, the balloon began glowing as it rose like a moon. Attached to the balloon was an acrobat lifting and spinning to the delight of the crowd. At every turn, there were magicians and jugglers and large musical acts. The main event was held oceanside. Massive in scope, the entire courtyard was filled with approximately 30 food stations and bars serving cuisines and beverages from around the world.

On Tuesday, festivalgoers would typically visit farms. This year, guests toured plantations in the tobacco zone of Partido in San Antonio de los Banos and Alquizar. Attendees visited a small portion of the 95 hectares dedicated to shade-grown tobacco.

“This area, which is served by a staff of 337 workers, produces 70 percent of the entire export wrapper leaves harvested in the country, and we generate 1.7 tons of tobacco per hectare, of which about half of it is for export,” said Armando Trujillo Gonzalez, president of the agricultural cooperative that runs the farms in the area and a 2011 Habanos Man of the Year.

Even though the harvest concluded on Jan. 15, several hectares of cheesecloth-covered tobacco plants were on display. The curing barns were still full of harvested tobacco, which takes about 90 days to cure.

On Tuesday evening, Tobacco Reporter took a side trip to a box factory now owned and operated by Ariel Gonzalez, a custom humidor maker and artist. In less than a decade, Gonzalez has grown his business from eight employees to more than 30.

Gonzalez’s business is preparing to expand again. “We have received new orders from Habanos that will boost our production, so we will need more space,” said Gonzalez. The company is moving many of its ancillary needs, such as box production, away from China and back to Cuban soil. “It is good for the people of Cuba, and we are thankful for having the opportunity from Habanos.”

The festival’s much-anticipated seminars started on Wednesday. They comprise lectures and presentations, but the most popular activity is the master class on rolling cigars. Participants are given the materials needed to roll their own cigars, including seco filler, ligero filler and binder tobacco and a wrapper leaf, as well as a solid wood cutting board, an apron, cigar glue and a chaveta to cut the tobacco.

Lecturer Jose Miguel Barzaga Marcelo rolled a nearly perfect vitola Damas with a 52-ring gauge from the Gold Line of the Romeo y Julieta brand. A large video screen allowed students to follow along. Bossert rolled one of the best cigars in the class and then helped several attendees roll theirs. “You have to make sure the leaf is facing the right direction,” he explained. “It is very important in creating a smokable cigar.”

Wednesday’s evening event was held at the El Laguito reception hall, which has been the location for many notable Habanos release parties. The dinner was dedicated to the 30th anniversary of the La Casa del Habano (LCDH) franchise, which comprises 155 establishments in more than 118 cities worldwide.

The event also honored the 85th anniversary of the Montecristo brand. The cigar release, the Montecristo Herederos, was dedicated to both events. Measuring 6 3/8 x 47, the Herederos will be packaged in 20-count humidors sold exclusively at LCDH locations and Habanos specialists’ locations.

Habanos “took guests around the world,” presenting acts from countries where LCDH franchises are located. This included everything from Adele covers to an African dance troupe. There was also a magician. The evening closed with Grammy award-winning composer Charles Fox performing his hit “Killing Me Softly with His Song.”

It doesn’t take much to make a cigar defective. It can be anything from a small scratch on the wrapper to an error of a few millimeters in length or thickness. Rejected cigars are distributed among the factory workers, who receive between three and five bandless units daily.

La Corona produces brands such as Punch, Hoyo de Monterrey, Por Larranaga and Diplomaticos but is best known as the home of the Romeo y Julieta brand. The Partagas factory, which employs more than 400 people, moved to the former El Rey del Mundo factory in 2016 due to the dilapidated condition of its original facility.

At night, participants returned to the Palacio de Conventiones where they were treated to a wine pairing with wines from Bodegas Torres, the largest winery in Spain. The first pairing introduced the Magnum 54 from H. Upmann and the red Salmos from Priorat, vintage 2016. The second pairing featured Vigia from the Trinidad cigar brand, which was accompanied by the Purgatori red wine of the 2016 harvest.

Friday marked the finals of the Habanos World Challenge, a competition centered on participants’ knowledge of Habanos. Everyone was preparing for the gala evening, a spectacular celebration at the Pabexpo Fairgrounds that could be compared only to the Oscars film awards.

The theme this year was Romeo and Juliet, in celebration of the Romeo y Julietta brand’s 145th anniversary. The show was highlighted by a performance from disco diva Gloria Gaynor, who thrilled the crowd with her hit songs “I Will Survive” and “I Never Can Say Goodbye, Boy.”

Other highlights included Camerata Guido Lopez and the Maestro Patterson Orchestra. There were also performances led by Santiago Alfonso, winner of the 2006 Cuban National Dance Award, and Vengsay Valdes, director and first dancer of the Cuban National Ballet.

The closing ceremony also hosted the Habanos Awards with Alexander Avellar receiving the prize in the communication category, Jean Claude Reichling winning the award in the business category and Servilio Jesus Cordova Torres prevailing in the production category. The World Challenge contest was won by Tarek Gamaye and Fabi Hammad from the United Arab Emirates.

The festival ended with its traditional humidor auction, which raised a historic €4.27 million ($4.74 million) for the Cuban Public Health System. This year, five humidors from prestigious Habanos brands were auctioned. One humidor sold for an unprecedented €2.4 million. The brand: Cohiba, of course. “It is sad the celebration is over,” said Nunez at the end of the night. “Next year, come see us again. It will be even more unbelievable.” 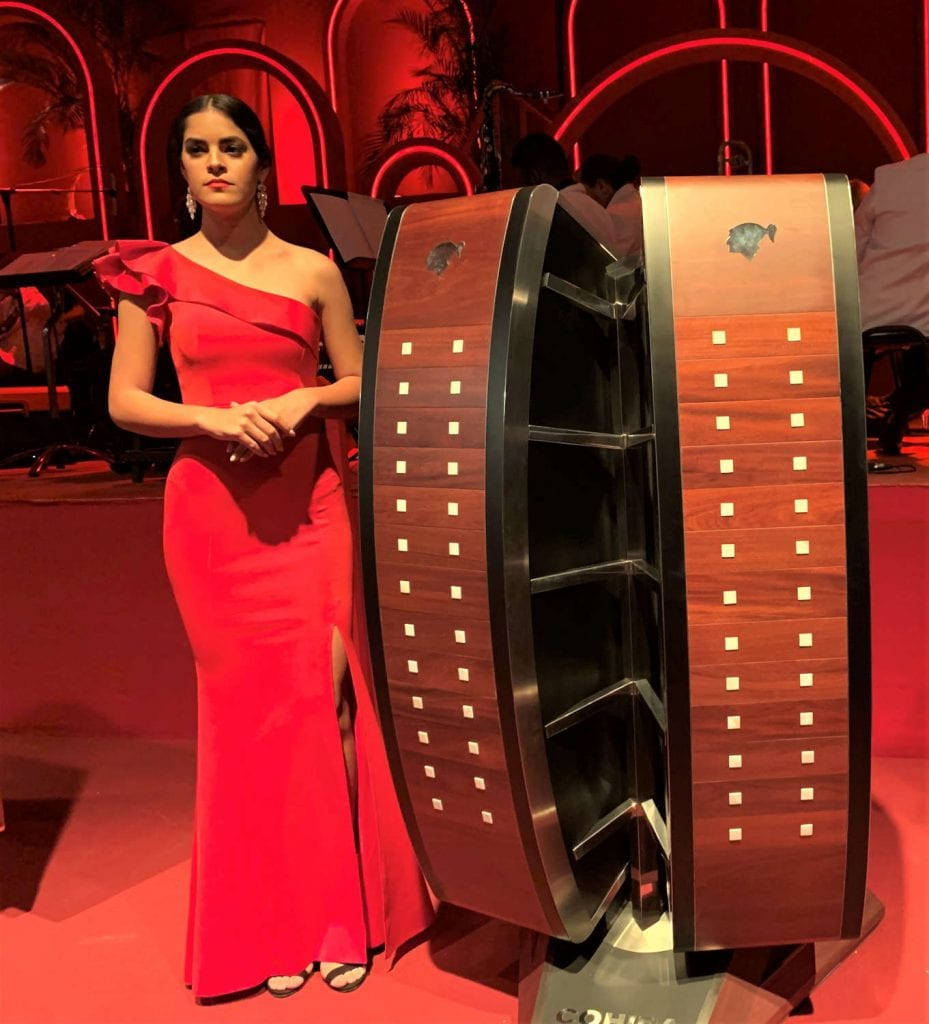 It was a record-breaking year. The 22nd edition of the Habanos Festival humidor auction, which benefits the Cuban healthcare system, raised nearly €5 million ($5.56 million). The feat also included the sale of a Cohiba humidor that earned the highest bid of any humidor ever put up for auction.

Held after Friday’s gala dinner, the humidor auction has for years been one of the most anticipated events of the festival. Since 1999, the auction has sold more than 100 humidors and raised more than €15 million. This year’s auction was hosted by Christie’s of London auctioneers Dalia Padilla and Maria Eugenia Alvarez, who gave tribute to the life of Simon Chase, who had conducted 16 humidor auctions at previous festivals.

However, it was the fifth and final humidor of the night that brought the crowd to a standing ovation. A Cohiba, the most coveted of the Habanos brands, humidor dedicated to the 500th anniversary of the city of Havana, with 450 sticks of all the Cohiba vitolas of that brand, sold for €2.4 million. This was a record for a humidor auction, according to Christie’s. The final earnings of the auction totaled a Habanos Festival record of €4.27 million.–T.S.D.