From No. 5 to No. 4 in only five years: KT&G has set an ambitious goal. Currently the world’s fifth-largest cigarette manufacturer, South Korea’s leading tobacco firm aims to become part of the Big Four by 2025—a quantum leap, as the company described it in a recent exchange with Tobacco Reporter. To achieve that target, KT&G has devised a comprehensive strategy: It plans to solidify its position in its domestic tobacco market, expand its international tobacco business, diversify its operations and maximize both financial and nonfinancial values.

Originally a government-owned monopoly, KT&G faced fierce competition when South Korea’s tobacco market liberalized in 1988 and foreign cigarette manufacturers entered the country. Yet despite the challenge presented by new players, KT&G managed to maintain its leading position. In 2019, the company accounted for 64.1 percent of its domestic market, generating annual sales of more than $4 billion.

By turning its focus outward, embracing change and building a competitive edge, the company has grown significantly. A Korea CXO Institute survey published in February 2020 rated KT&G as the most profitable company among South Korea’s 30 biggest conglomerates. At 24.3 percent, the company had the highest average net income margin between 2008 and 2018.

The cigarette manufacturer currently exports to more than 80 countries, a number that is supposed to increase to 200 within five years. The company, which outside South Korea is best known for its Esse super slims brand, started selling cigarettes overseas in 1988. In 2008, it established its first international plant in Turkey followed by a factory in Russia in 2010. In 2011, KT&G acquired Indonesia’s sixth-largest tobacco manufacturer.

“KT&G will expand its overseas tobacco business by region and by actively pioneering new markets it has not entered yet,” a spokesperson told Tobacco Reporter. “In order to successfully enter new markets, KT&G will strengthen the distribution network and marketing infrastructure of the major continental regions. KT&G will also focus on developing brands that meet the needs of local consumers. In fact, exports to new markets in Africa, South and Central America, and Asia-Pacific regions have sharply increased over the past few years, resulting in the diversification of the markets and shifting from dependence on the Middle East to frontier markets. KT&G will continuously strive to diversify its markets to various regions.”

In February of this year, the company signed a KRW2.2 trillion ($1.82 billion) contract with Alokozay of Dubai, one of the largest FMCG brands in the Middle East, for a period of seven years and four months. Industry officials said the deal would help KT&G avoid the huge costs required to set up an independent sales network in the region. The deal also brings predictability to the South Korean company’s business because it requires Alokozay to purchase certain volumes of KT&G products for the duration of the agreement.

In its home market, KT&G plans to reinforce its leadership position by expanding its portfolio of low-tar and low-nicotine products along with low-odor products, which are known as “smell-down” products in South Korea. “The biggest trend that shaped the domestic tobacco market during the past few years can be defined as smell-down tobacco,” says KT&G’s spokesperson. “In 2017, heated-tobacco products [HTPs] were first introduced in the domestic market, and the consumers showed interest in the smell-down feature of the heat-not-burn products. KT&G discovered this consumer trend and concentrated its efforts in incorporating smell-down technology in traditional tobacco products.”

Last year, the company established a dedicated Smell-Care Research Center, which enabled KT&G to successfully developed various smell-down solutions, such as a cigarette-breath reduction technology, a finger zone that reduces cigarette smell on fingers and the “triple care” system, which minimizes cigarette breath and cigarette smell on fingers and cigarette smell on clothes. Since last year, KT&G has launched five smell-down products in South Korea. “All five products have received highly positive feedback from consumers and have helped KT&G reach the highest domestic market share in the past 10 years,” the spokesperson said.

However, the domestic operating environment has become increasingly unfavorable to KT&G. At the time of liberalization, South Korea was the world’s 12th-largest tobacco market, with cigarette consumption of 80 billion to 85 billion sticks annually. Amid increasing tobacco control measures, the country’s cigarette market has declined continuously over the past decade. In 2019, smokers consumed 3.45 billion 20-cigarette packs, down from 3.47 billion in 2018, according to a Korea Herald report. The figure represents a 20.9 percent decline from 2014, which is largely attributed to an 80 percent tax-driven cigarette price hike in January 2015. In 2016, the government started requiring tobacco companies to print graphic health warnings on the upper part of their cigarette packs.

Despite ever stricter regulations, South Korea still has a relatively high smoking prevalence of 21.7 percent, according to a 2018 Statista survey. It’s predominantly men who smoke (40.6 percent). After HTPs hit the market in late 2017, however, the smoking rate declined markedly. Within a year, South Korea became the second-largest market for HTPs behind Japan. In 2019, HTPs accounted for 10.5 percent of the country’s cigarette market, according to the Ministry of Economy and Finance. Sales of traditional cigarettes fell 2.4 percent to 3.06 billion packs in 2019 while sales of HTPs rose 9.3 percent to 360 million packs, according to The Korea Herald. 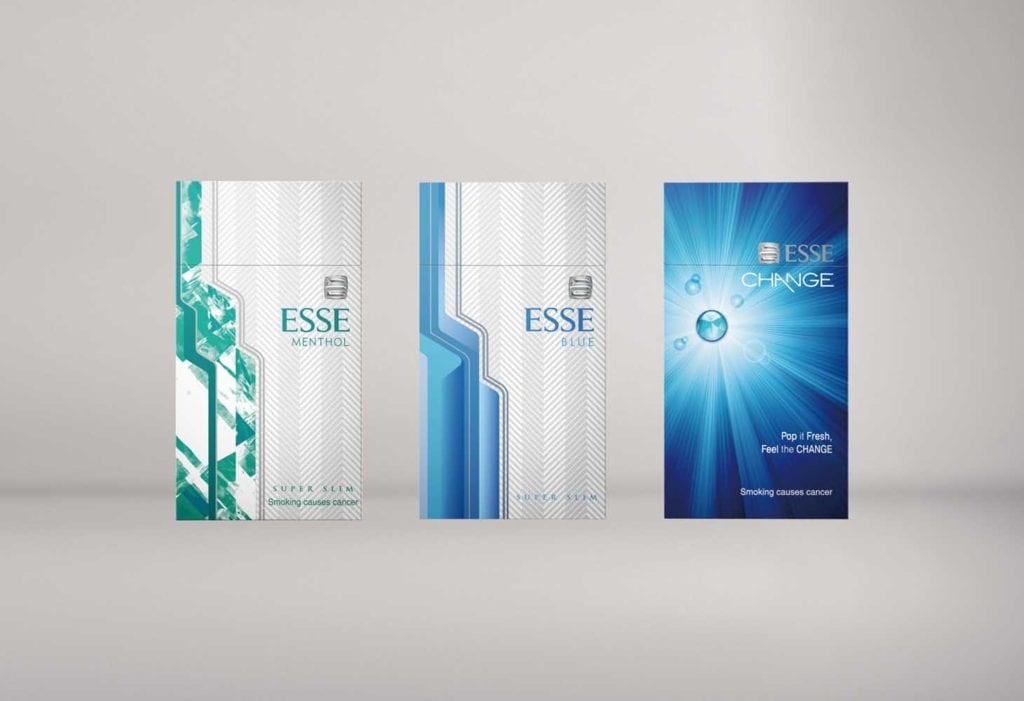 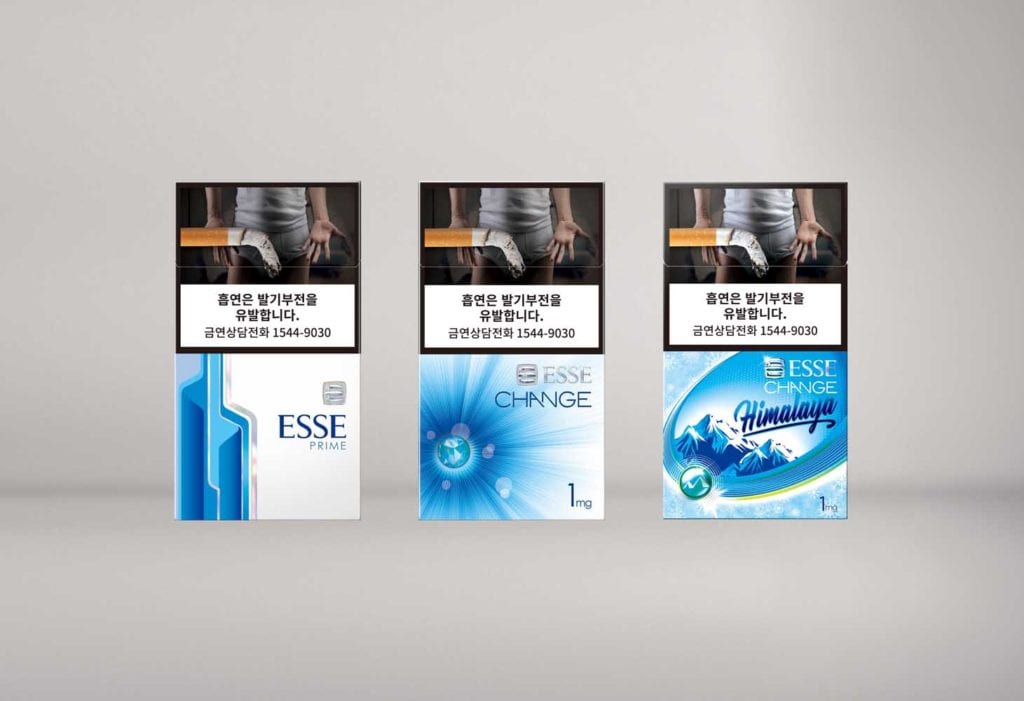 Investing in the future

KT&G believes it held on to its No. 1 position in South Korea because it built a well-balanced portfolio of both traditional tobacco products and next-generation products (NGPs). The company has stepped up research and development in both categories. Its R&D investments reached KRW23 billion in 2019, having continuously grown every year from KRW12.6 billion in 2015. KT&G also recently established a task force focused solely on developing NGP technology and doubled its number of researchers. As a result, KT&G’s patent filings have increased tenfold over the past three years to 431 cases in 2019.

In 2017, the company entered the HTP market with its Lil brand of which it has launched several variants and updates since. The name Lil stands for “a little is a lot,” according to KT&G. The concept is meant to capture product qualities such as minimalism, simplicity, user-friendliness and sophistication.

The Lil family includes products such as Lil Plus, Lil Mini and Lil Hybrid. The latter product is the culmination of KT&G’s independent technology and has been widely recognized for innovation, according to KT&G. Lil Hybrid simultaneously uses tobacco sticks and liquid cartridges, allowing consumers to experience reduced cigarette smell and increased vapor production at the same time. The product was introduced at many international exhibitions last year in which it received great acclaim from international buyers around the world.

The brand is likely to become even more popular soon. In January, KT&G and Philip Morris International (PMI) signed a three-year agreement to commercialize Lil overseas. According to KT&G, the deal presents an opportunity for KT&G to introduce its NGP portfolio worldwide through PMI’s massive global sales network, which spans 180 markets.

In addition to the company’s current NGP product line, the contract also encompasses the products’ future versions. It also includes consumables, such as Fiit and Miix tobacco sticks, which are designed to be compatible only with Lil devices. KT&G and PMI are discussing the potential for a parallel brand association between Lil and PMI’s HTP, IQOS. The international expansion through PMI’s network is expected to start later this year in several yet-to-be identified markets.

The deal comes at a time when NGPs in South Korea are increasingly under pressure. In 2018, a controversial study by the country’s Ministry of Food and Drug Safety concluded that HTPs emitted even more tar than conventional cigarettes. The authors added that the products were not suitable as smoking cessation tools. Following the outbreak of vaping-related illnesses last year in the U.S., the South Korean government in October 2019 issued a “strong warning” against e-cigarettes.

A market with potential

In its pursuit of new growth engines for a sustainable future, KT&G has successfully diversified its business into various nontobacco sectors, including health and beauty, bio and pharmaceuticals and real estate. The company has been especially committed to strengthening its ginseng and health functional food business through its wholly owned subsidiary, Korea Ginseng Corp. (KGC). It’s a compelling strategy; Future Market Insights valued the global ginseng market at $622.9 million in 2019. With demand for plant-based products rising at a steady pace, the research firm expects the ginseng market to reach $903.8 million by the end of 2027.

KGC has been continuing the tradition of Korean ginseng for more than 120 years, according to KT&G. During that time, KGC has not only maintained its leadership position in the domestic market but also evolved into a global company supplying ginseng and health functional food products to more than 60 countries. To establish a solid foundation for a long-term and sustainable future, KT&G says it will continue to expand its ginseng and health functional food business and its other business sectors.

In the ongoing Covid-19 pandemic, KT&G has fared well so far. By implementing preventive measures against infection, the company has managed to avoid disruption to its operations and supply chain. Of course, some of the company’s export markets have imposed national lockdowns, potentially altering the business outlook depending on the levels of supply chain disruption and lockdowns in those countries.

In the important Middle East market, however, KT&G has seen no significant disruption to logistics and retail sales. In the markets where the company has subsidiaries, the impact has been limited because it runs its own manufacturing facilities. While it is impossible to predict when the pandemic will cease, KT&G says it will minimize the impact by continuing to closely monitor the developments around Covid-19 and adjusting its strategy as necessary.

Tobacco Reporter’s editorial style guide calls for product names to be capitalized even when trademark owners use different cases as part of their branding. The chart below shows the differences between our spelling and that used by KT&G for the brands mentioned in this article.