In the past years, cannabis has rapidly transited out of its dirty corner, turning into one of the world’s fastest growing industries. Business intelligence companies outbid each other with forecasts for the category. According to a 2019 report by Arcview Market Research and BDS Analytics, for example, global licensed store sales are expected to reach $40.6 billion by 2024, and that estimate does not even take into account general retailers selling cannabidiol (CBD) products and cannabinoid-based drug developers selling marijuana-derived pharmaceuticals.

The U.S. is projected to remain the world’s largest market with a forecast $30.1 billion in marijuana spending by 2024, the report says. Canada, which legalized recreational cannabis in October 2018, is expected to experience similar growth rates. Despite slower growth, the total cannabis market, including medical use, is forecast to generate up to $7 billion in sales in 2020 with $2 billion to $4 billion in the legal recreational market, according to cannabisbusinessplans.com.

While recreational cannabis remains prohibited at the U.S. federal level, 11 states have legalized the substance since 2012. Medicinal use is legal in 33 states. According to New Frontier Data, 223 million Americans, or 68 percent of the population, now live in a state that has expanded access to CBD, medical cannabis or full adult use. The organization lists related investments of $13.8 billion and $11 billion in 2018 and 2019, respectively.

The 2018 Farm Bill has turbocharged the boom: Among other things, it removed hemp’s low amounts of THC from the Controlled Substances Act. Furthermore, the bill allows hemp production in all 50 states for any use, including flower production and CBD or other cannabinoid extraction, as well as interstate commerce. The U.S. defines hemp as cannabis that contains 0.3 percent or less tetrahydrocannabinol (THC), the psychoactive substance in cannabis that produces the “high” people experience when they smoke marijuana or eat foods containing it. Legally, “marijuana” refers to cannabis that has more than 0.3 percent THC by dry weight. For an intoxicating effect, a THC content of 5 percent to 10 percent is required. The nonpsychoactive component in cannabis, CBD, is believed to provide health and wellness benefits.

While Research and Markets expects the overall U.S. market for cannabis derivatives to increase at a compound annual growth rate of 23 percent by 2027, Nielsen has singled out smokable hemp as one of the fastest growing and most lucrative segments in the CBD and hemp industry. For 2020, the firm projects U.S. sales of smokable hemp to reach up to $80 million. By 2025, it is expected to stand at $300 million to $400 million, representing about 5 percent of the hemp-derived CBD consumer products category in the U.S., which Nielsen expects to increase from $1.7 billion to $2 billion in 2020 to $6 billion to $7 billion in the next five years. 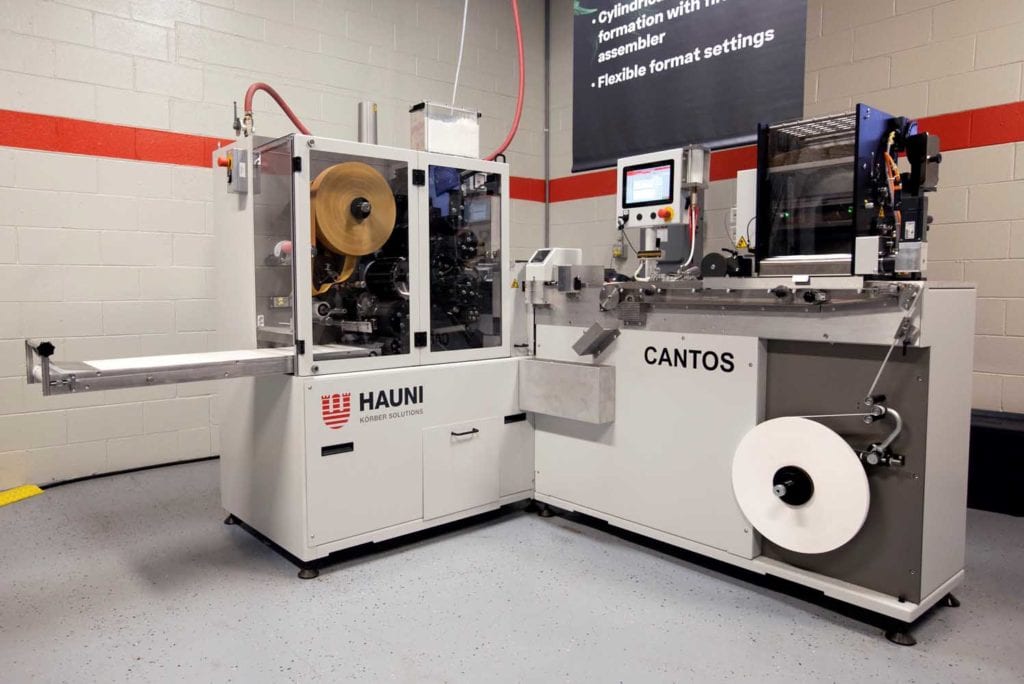 The considerable potential of the legal smokable hemp category suggests opportunity for suppliers of machinery designed for tobacco products. Almost two years ago, a U.S. provider of tobacco processing equipment already ventured into this field with dedicated cannabis drying and processing machinery. Now German tobacco machinery manufacturer Hauni Maschinenbau is entering the market. At the open house event of its Hauni Richmond subsidiary in October, the company launched three machines for cylindrical pre-roll making as well as a range of accompanying equipment.

To efficiently increase production levels in the smokable hemp industry, technological advances are the next logical step, according to Thomas Gruss, head of business development for hemp/cannabis projects at Hauni. “Typically, the hemp cigarette industry consists of small-scale manufacturers that produce pre-rolls manually or semi-automatically,” he says. “To produce THC-containing pre-rolls made from processed cannabis flowers, the cones or tubes are stacked vertically into a tray. A so-called ‘knock box’ containing the ground cannabis flowers is put on top. By shaking the knock box, the blossom material is fed into the cones or tubes. Even some larger companies mainly work with knock boxes, which involves a lot of manual labor and is rather inefficient, resulting in an output of approximately 2,000 pre-rolls per day per operator.

“There are other manufacturers that use machinery, but this allows only for a typical manufacturing speed of 30 to 40 pre-rolls a minute,” Gruss continues. “A third group manufactures ‘king-size’ hemp cigarettes that are made from biomass and resemble regular tobacco cigarettes. Those companies produce on old cigarette-making equipment. Overall, there is a clear trend within the industry toward machine-made production, and it is toward cylindrical tubes as hemp cigarettes become more of a mainstream product. With our machine models, we want to address all three manufacturer groups.”

For tobacco cigarette manufacturing, the Hauni group of companies offers a range with a variety of production speeds. However, a one-to-one transfer of its tobacco manufacturing technology to the new category proved impossible. Cannabis is a more complex raw material than tobacco. The latter is consumed primarily for its main active substance, nicotine. The lion’s share of the world’s tobacco harvest ends up in combustible cigarettes, the dominant nicotine-delivery device. Farmers cure tobacco leaves—as opposed to blossoms—and manufacturers thresh it into a relatively dry, string-line mass that is comparatively easy to process.

By contrast, cannabis contains more than 100 different chemicals, called cannabinoids, each of which has a different effect on the body. The various plant parts fetch greatly differing prices on the market. The dried blossoms, which contain THC in the shape of small resinous beads, are the most valuable, selling for about $2,000 per pound. This means they cannot be damaged during the pre-roll manufacturing process. Processing the blossoms is also challenging because they are sticky, thus requiring frequent machinery cleanings. The finished joints sell for $12 to $20 per piece; unlike tobacco cigarettes, THC-containing pre-rolls are sold in batches of seven units at most.

To produce more affordable CBD-containing hemp cigarettes, which usually retail at $13 for a pack of 20, manufacturers use cannabis biomass, which consists of leaves, stems and blossom parts. This shredded hemp makes a crumbly filling, requiring the tube or cone to be twisted or closed at the end.

In addition to the mechanical challenges of manufacturing cannabis products, most players lack the financial resources of their tobacco counterparts. “The cannabis market is quite sensitive when it comes to large investments,” says Gruss. “Players in the U.S. are not willing to invest millions of dollars in a higher speed maker as tobacco companies would, as most of them have to finance their equipment from their own resources. Besides, the market is still small compared to the cigarette market. Our objective, hence, was to offer machinery that costs well below the million-dollar figure benchmark.” 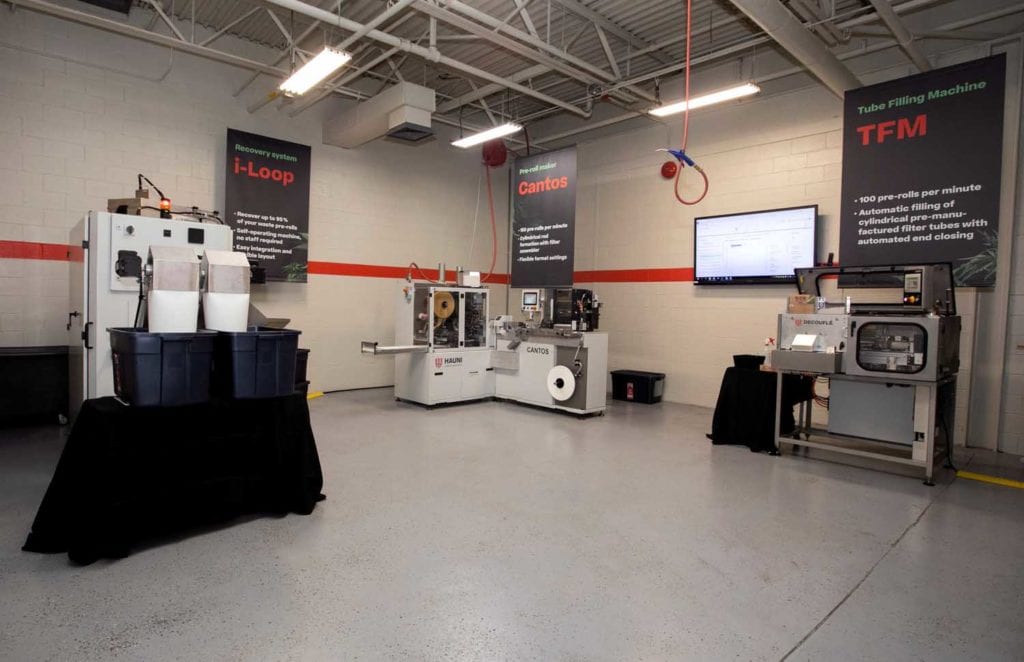 To cater to the cannabis sector’s varying needs, Hauni has developed three different solutions. The company’s tube-filling TFM is an entry-level model with an output of 85 pre-rolls per minute. The machine automatically fills cylindrical, standard pre-manufactured hemp filter tubes and closes their ends with a folding motion rather than a twisting motion.

Hemp or biomass is fed horizontally into the open tube, thereby avoiding any human contact with the raw material. The maker creates a homogeneous filling, which is compressed to make the material less likely to trickle out of the finished cigarette. Its careful handling of the filling material also makes the TFM suitable for larger companies manufacturing pre-rolls containing expensive flowers, according to Gruss. The machine layout has been kept simple, avoiding the need for a skilled operator. The TFM runs on household power, is easy to handle and to clean and allows for easy weight change.

Cantos is a semi-automatic maker that can process hemp biomass as well as pure flower material. The machine is based on the company’s tobacco cigarette rod maker technology and coupled with a flexible filter assembler. The maker allows for cylindrical rod formation with or without a filter, running at speeds of up to 150 pre-rolls a minute. The plug-and-play machine enables flexible format settings with only a small amount of format parts required for diameter changes and no parts required for length changes. It can handle small batch sizes, has an online weight control system and allows for the attachment of different filter types.

“For the TFM and Cantos, the stipulation was to design machines that require as little external infrastructure as possible,” says Gruss. “Unlike in the tobacco industry, there are few trained operators in the cannabis sector. The larger a machine, the more complicated and time-consuming the operating and cleaning process. We developed the Cantos in such a way that it is mostly cleaning resistant. The parts that need to be cleaned can be reached easily.”

Nano-H is the company’s premium model—a fully automatic maker for industrial production that can manufacture up to 5,000 pre-rolls a minute and has been optimized for shredded hemp blends and processed paper. Heavy particles such as stems and seeds are separated, and a microwave system with closed-loop weight control allows for highly accurate rod formation for a homogeneous hemp rod with minimized waste. Manufacture is batch compliant. Hauni provides full operator training and technical support.

To handle the sticky raw material, Hauni deployed technology it had developed for other tricky products, such as kreteks. The cannabis machines are also capable of processing thin papers because cannabis consumers tend to prefer papers with gauges between 16 grams per square meter and 18 grams per square meter, which is thinner than papers typically used for commercial tobacco cigarettes. The construction of the filter in hemp cigarettes is equally important. Like the other components, it is supposed to be “natural” with low draw resistance and minimal taste adulteration. For many cannabis consumers, the primary purpose of a filter is not smoke filtration but to prevent particles from falling out of their cigarette.

In response to such preferences, Hauni has developed a “crutch-type” filter maker that manufactures biodegradable filters typically made from natural fleece or paper bobbins

To further support customers in their development of pre-roll products, Hauni also offers a hemp flavor collection and is testing a reconstituted hemp paper at its new pilot recon plant in Hamburg, Germany. “There is a lot of interest in the market to manufacture tobacco-heated products that contain hemp. Once the raw material has been processed into a reconstituted sheet, it can be used much more conveniently in a blend,” notes Gruss.

For the time being, cannabis cigarette products remain largely unregulated. Gruss expects this to change soon. “Tar and carbon monoxide limits will become relevant as well as hemp-specific alkaloids,” he says. Anticipating such developments, Hauni has adapted its quality control, emission testing and smoke analysis equipment for cannabis smoking products. Completing its offerings, the company has added a hemp recovery unit. Increased automation, he insists, will contribute to both the quality of hemp cigarettes and the growth of the sector.