Years of hard work and investment are rewarded with a new oriental tobacco harvester.

Historically, classical oriental tobacco (COT) production has been associated with tradition, which, looked at from one viewpoint, was epitomized by the often-exquisite packaging of the relatively tiny leaves of the highest quality tobaccos while, looked at from another direction, it was personified by the huge amount of labor that went into forming such presentations—such works of art.

Of course, while such traditions encompassed values that transcended the field of economic activities, many of them could not survive the shifts in business priorities that gathered pace, especially during the final quarter of the 20th century. Consequently, changes were gradually introduced to the way that COTs were produced so as to conform to new marketplace and social realities while safeguarding the essentials: the unique tastes and aromas that these tobaccos imparted to the smoker.

But even with such changes having gathered pace during the past 10 years or so, it is somewhat surprising to learn that two major developments in the field of COTs came to fruition in 2020, a year that most businesses and industries, including the tobacco industry, were glad to see the back of.

Nikos Tzoumas, managing director of Missirian and president of the Hellenic Inter-professional Organization, told me in November that, after nine years of hard work and substantial investments by his company, VIT SA, and Philip Morris International (PMI), a second model of the HMO-2020-2R oriental tobacco harvesting machine was ready for the market.

The new harvester had been tested and trialed during the summer of 2020 when it was used to harvest crops in four stalk positions, Tzoumas said. With only two people, the machine proved capable of harvesting eight hectares of oriental tobacco during a season—up to 12 tons of cured oriental tobacco, which is a far cry from traditional harvesting in which teams of hired labor and family members have to undertake back-breaking work in high temperatures to bring in the tobacco by hand. Little wonder, then, that Tzoumas said farmers, especially younger ones, were eager to embrace such new technology. 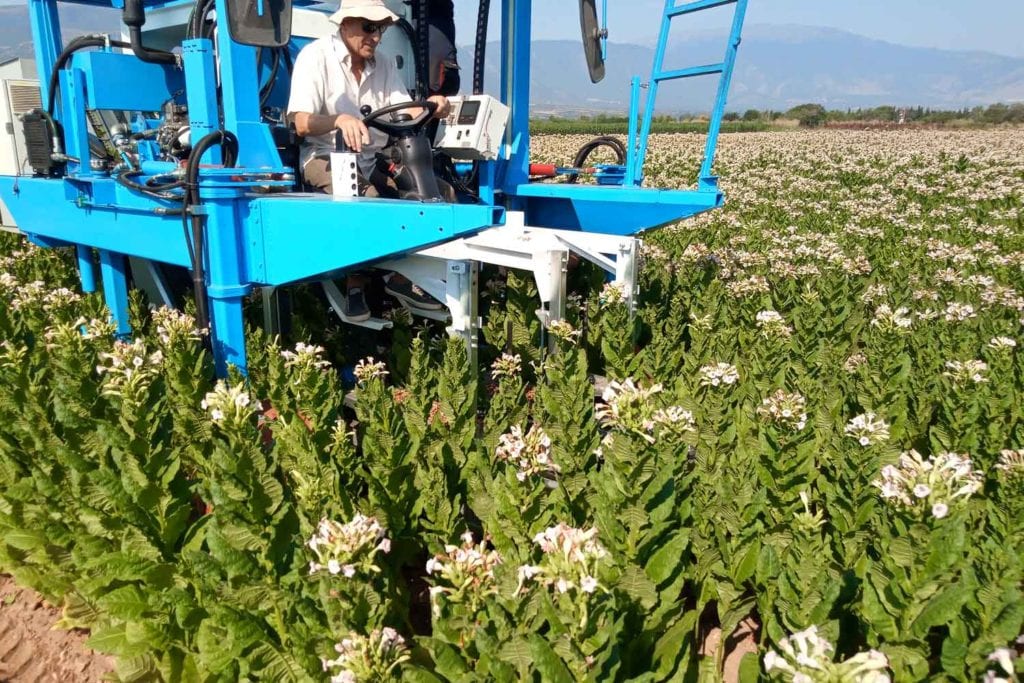 Meanwhile, the curing of the leaves, which, with the advent of mechanical harvesting, caused a bottleneck in the process, has been sped up with the use of a system initiated and supported by PMI over a number of years. The harvested tobacco is placed by hand in long gauze “socks” through which the air can pass and which can be hung in the shade in an otherwise traditional way. Apart from the speed of the new process, it has the advantage of doing away with the strings on which the tobacco was previously threaded and hung and which could end up as nontobacco-related material, a bane of the manufacturing process.

Another 2020 marker saw the arrival of a new pure line of Basma seed, the fruition of a project initiated by Missirian in 2013 and co-financed by PMI. Tzoumas said the aim of the project had been to develop a new Basma variety that could provide higher yields than were obtainable with existing varieties while retaining the stable, desirable agronomic and quality characteristics of Basma.

The project was undertaken by the Centre for Research & Technology Hellas at the Institute of Applied Biosciences in Thessaloniki under professors Panagiotis Madesis and Eirini Nianiou-Obeidat. They used conventional plant breeding techniques and molecular markers but without producing genetically modified plants. And, after eight years of work, the project was concluded with the researchers having developed the F10 lines with the requested specifications. The new seed is expected to deliver a 20 percent increase in farmers’ yields with quality maintained.

An application has been made to the Greek Ministry of Agriculture for registration of the new genotypes.

Farmer yields were described as favorable in all growing areas, and estimated production is generally in line with contracted quantities, except in North Macedonia, where 2020’s estimate of 27,000 tons was 17 percent above the contracted 23,000 tons. The quality of the 2020 crops was described as medium, with Basma quality better than that of the 2019 crop, Katerini quality being about the same, and the quality of the Prilep and Krumovgrad crops being lower.

Demand seems to be weaker than it was last year, especially for A grades.