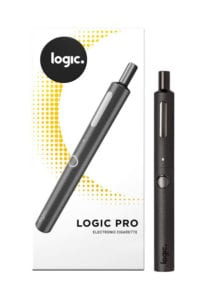 Logic brand e-cigarettes will end online sales of its products in the U.S. “Unfortunately, as of March 16, 2021, we will discontinue online sales of Logic products,” the manufacturer wrote in an email to customers. “Due to recent regulations, Logic will be unable to ship online orders after this date.”

The company says that the recent amendment to the 2009 All Cigarette Trafficking (PACT) Act prevents the company from being able to mail its products to consumers. In late December, Congress voted into law a $2.3 trillion coronavirus relief and government funding bill that contains a provision banning the U.S. Postal Service (USPS) from delivering vapor products.

The USPS was already prohibited from delivering cigarettes and smokeless tobacco products to consumers under the PACT Act. The law passed in December extends the act’s original definition of “cigarette” to include electronic nicotine-delivery systems (ENDS).

Tobacco and vapor companies may use private services to ship their products to consumers, but the PACT Act requires them to register with the Bureau of Alcohol, Tobacco, Firearms and Explosives and the tobacco tax administrators of the states into which a shipment is made. Delivery sellers are further required to verify the age and identity of the customer at purchase and maintain records of delivery sales for a period of four years after the date of sale, creating substantial administrative burdens.

Critically for the vapor industry, the most popular carriers, Federal Express (FedEx) and United Parcel Service (UPS), have recently announced that they would cease all deliveries of vapor products.

Logic is not the first vapor company to cease online sales in the wake of the shipping ban. In February, Securience, which manufactures Durasmoke, Forge and other brands, announced it would be closing its doors in March due to the restrictions.

When the legislation took effect, experts predicted that small companies would bear the brunt of the measure.