Five years ago, Philip Morris International (PMI) announced its ambition for a smoke-free future, based on the development and commercialization of smoke-free products that are less hazardous than combustible cigarettes. During its virtual Investor Day conference on Feb. 10, 2021, PMI provided an update on its progress and revealed new targets. By 2025, PMI aims to derive more than 50 percent of its net revenues from smoke-free products, up from 24 percent in 2020.

IQOS Iluma, the next generation of its IQOS heated-tobacco product (HTP), is supposed to play a major role in the company’s transformation. The device comes with a new internal heating technology based on induction and will be launched in the second half of this year. “IQOS Iluma is simple and intuitive,” explained PMI’s Chief Operating Officer Jacek Olczak. “It self-activates and requires less explanation, which will save time and cost of acquisition as well as aftercare and retention. It supports easier switching and higher conversion for legal-age smokers.”

The Iluma will be available in three designs at three price points. Next to a super-premium version, there will be a variant that corresponds to the present IQOS model 3.1 and more affordable version. For the time being, Olczak said, PMI will maintain IQOS with both the blade and the induction technologies on the market.

“Higher loyalty to the new products will drive consumers to conversion. Requiring less infrastructure, Iluma will enable more access to geographically remote areas,” said Olczak. Iluma will be introduced with a new broad range of consumables; the tobacco sticks of blade and induction technology devices cannot be interchanged.

In the five years since PMI announced its smoke-free ambition, the company has created an entire new product category. As of December 2020, IQOS had 17.6 million users, of which 12.7 million had switched from cigarettes and stopped smoking, according to PMI’s CEO Andre Calantzopoulos. The product is present in 64 markets, a reach planned to be expanded to 100 in the next five years. It also has an 80 percent segment share. According to PMI, IQOS is the world’s No. 1 smoke-free brand and No. 5 nicotine brand. In IQOS markets, the product is the third largest brand behind Marlboro and Winston. IQOS generated net revenues of $6.8 billion in 2020. To date, PMI has invested $8.1 billion PMI in developing reduced-risk products. IQOS has remained remarkably resilient during the Covid-19 pandemic, Calantzopoulos said. In 2020, 76 billion heated-tobacco units (HTUs) were shipped, an amount that is targeted to reach 140 billion to 160 billion in the 2021–2023 period.

Calantzopoulos anticipates a decline of total nicotine industry volume of 1 percent to 2 percent over 2021 to 2023, but a clear transition to nicotine smoke-free products. He expects the share of combustible cigarettes and other tobacco products (OTP) to decrease from 94 percent in 2020 to 90 percent by 2023, whereas smoke-free products (HTP, e-vapor and nicotine pouches) are estimated to grow from 6 percent to 10 percent over the same period. The HTP category alone, which had a volume share of 3 percent last year, is forecast to account for 7 percent by 2023, assuming the same regulatory conditions as for combustible cigarettes.

In 2020, the retail value of the global nicotine industry stood at around $450 billion. Of that, cigarettes and OTP represented 94 percent, HTP 4.5 percent, vapor products 1.6 percent and nicotine pouches 0.1 percent. Over the next four years to five years, Calantzopoulos expects value compound annual growth rates of roughly 4 percent for the total industry but 25 percent for HTP and 10 percent to 15 percent for vapor products.

Opportunity for IQOS remains vast. “There are 150 million addressable users in current markets and around 600 total international potential users excluding China and the U.S.,” said Calantzopoulos. Indonesia, the Philippines and Vietnam are considered sizeable geographies with potential for IQOS. The U.S. market, where IQOS was authorized as a modified-risk tobacco product by the Food and Drug Administration in July 2020, also holds great promise for the company. “There is high consumer interest in smoke-free alternatives,” Olczak explained, “and a rational and robust regulatory environment for building awareness.” Commercialization of IQOS in the U.S. is supposed to start in early 2021.

“Reduced-risk products (RRPs) are a different business,” said Calantzopoulos, describing PMI’s learning curve. “Their complexity is much higher than that of combustible cigarettes.” Apart from the different manufacturing and supply chain, operating in an uncharted regulatory landscape, the need to build new brand equity and for high conversion for harm reduction and gaining scale, he mentioned a new consumer “journey,” which drives development and commercialization and route-to-market, high upfront investment for meaningful entry and new organizational skills and ways of working. Rewards, though, were also higher, he added. Next to the positive public health impact, RRPs come with higher profitability. This is especially true for IQOS: Its margin is about 2.4 times that of combustible cigarettes and approximately five times that of closed-system vapor products, according to the company’s chief financial officer, Emmanuel Babeau. 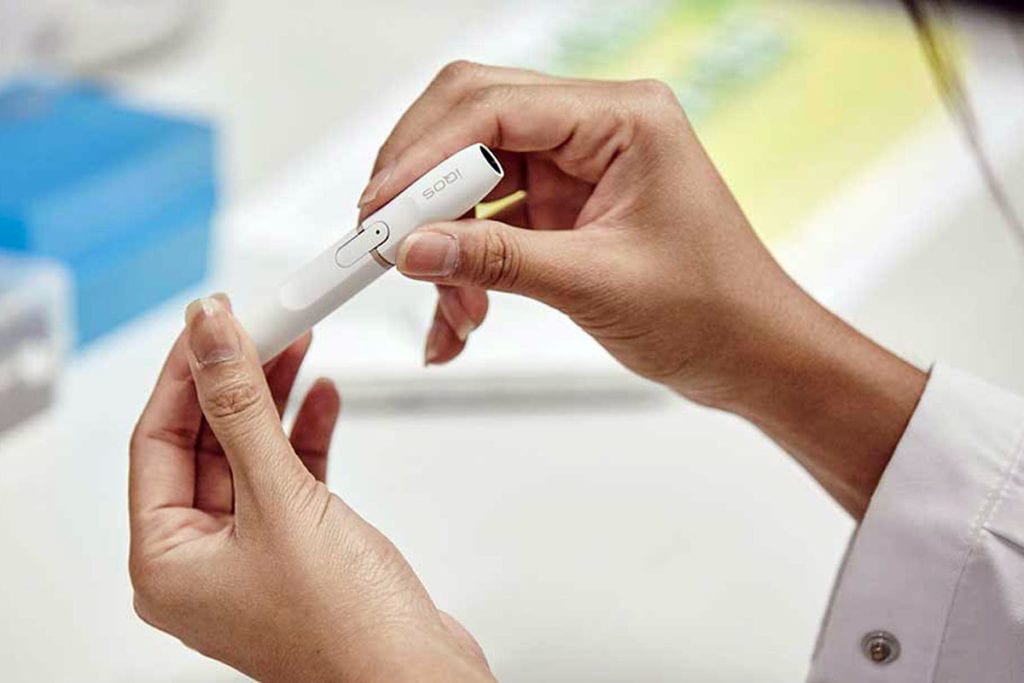 IQOS as an umbrella brand

Over the midterm, the company says it might need two to three technologies and respective consumable offers to cover the full spectrum of consumer price segments. As a premium brand, IQOS can be stretched over two price segments as in Japan. To cover three to five price points in certain markets, further offerings and partnerships will be required.

IQOS is supposed to become the umbrella brand in a consumption environment characterized by poly-use, Olczak pointed out. In the combined markets of the U.K., Germany, Japan and Russia, combustible cigarettes were consumed by 66 percent, vapor products by 7 percent and HTPs by 8 percent of nicotine users in 2019. But there were overlaps: Of the smokers, 4 percent also used HTPs and 7 percent also used vape products. Triple use was observed in 7 percent. “We will move from single to multi-focus, with IQOS addressing a range of consumer preferences,” Olczak said. In the future, the company forecasts, consumers will increasingly use different smoke-free products in parallel.

The second new product launch this year will hence be a vapor product called IQOS Veev. Based on the company’s Mesh technology, which uses a metallic mesh with tiny holes to heat e-liquid in a pre-filled, pre-sealed pod, the product will initially be introduced in more than 20 markets. “Closed system users mean better economics for the manufacturer,” Olczak stated. “The e-vapor category is growing and consolidating. The expected increase in users over the next five years will be 7 [percent] to 10 percent, albeit concentrated in specific geographies. For existing business models, returns remain low—there is low conversion to the category, low loyalty within the category, and a high number of devices per user driving up acquisition and retention cost.”

PMI seeks to enter the market from a different angle, Olczak added, by leveraging the IQOS infrastructure with a bespoke route-to-market approach. Veev will be a premium product coming with a new age verification technology that presently is in the final stages of testing.

PMI is also eying the nicotine pouch category, a small but growing segment with a market size of 5 billion stick equivalents in 2020. With new consumer tests, the company will develop its platform 2, a THP closest to the combustible cigarette ritual and experience, further this year. Platform 3, an electronics-free nicotine product, is supposed to be commercialized within the next three years.

To accelerate smoking cessation, Calanzopoulos called for differentiated regulatory frameworks taking the differing levels of harm of nicotine products into account. “We must stop debating whether RRPs should be made available, but how fast and how best to help the men and women who would otherwise continue smoking,” he said. “With the right regulatory frameworks, dialogue and support from civil society, cigarette sales can end within 10 [years] to 15 years in many countries.”

To refinance its RRP investments, PMI intends to achieve around $2 billion in annualized gross cost efficiencies by 2023 compared to the 2020 cost base. The company will continue to use the revenues from its combustible cigarette business to support its smoke-free expansion. In 2020, PMI generated net revenues of $28.69 billion ($29.81 billion in 2019), of which combustible cigarettes accounted for the lion’s share.

Excluding China and the U.S., the global cigarette market decreased by 6.7 percent in 2020 compared to the previous year, PMI estimates. In IQOS markets, the decrease even amounted to 9.1 percent. “The reduction of social smoking moments during the height of Covid-19 restrictions has led to consumption loss, which put Marlboro under pressure in 2002 while our other brands performed well,” Olczak pointed out. The temporary loss of duty-free due to reduced air travel contributed to the overall category decline. “But consumption will come back once we return to our pre-Covid-19 daily routines,” said Olczak. Although impacted by the pandemic, the company continued to lead the global cigarette market excluding China with a share of 25.7 percent, down from 26.9 percent one year previously. The downtrading trend continued last year, with the majority being from mid-priced brands to low-priced and super-low-priced products.

PMI predicts a further annual drop in global consumption outside China and the U.S. of 3 percent to 4 percent between 2021 and 2023. The company, however, already has plans to go beyond nicotine: It intends to employ its newly won expertise in life sciences, inhalation technology and natural ingredients to explore and develop botanicals and respiratory drug delivery, the market sizes of which PMI estimates at $29 billion and $36 billion by 2025, respectively. If its up to PMI, “beyond nicotine” products will contribute at least $1 billion to the company’s net revenues by that time.