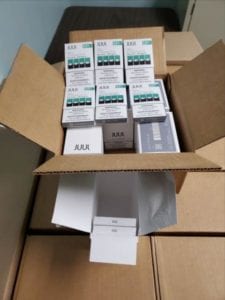 U.S. Customs and Border Protections (CPB) officers in Indianapolis seized six shipments containing more than 10,000 unapproved Juul Pods. All the shipments originated from an individual in Ontario, Canada, and were headed to various locations in New York and New Jersey.

The shipments arrived separately and were all seized on April 8. The packages were mismanifested as electrical apparatus, a common practice used by smugglers. A total of 10,464 pods were seized. The pods had an MSRP over $156,000.

“Our officers are dedicated to identifying and intercepting these types of shipments that could potentially harm communities,” said Kerry Carter, acting port director for Indianapolis in a statement. “Our officers and specialists enforce hundreds of laws for many partner agencies and are committed to ensuring the health and safety of American citizens.”

Last year, the Food and Drug Administration announced an increased enforcement priority of electronic nicotine-delivery systems and issued detailed guidance to the industry of these new enforcement priorities that regulate the unauthorized importation of tobacco products.