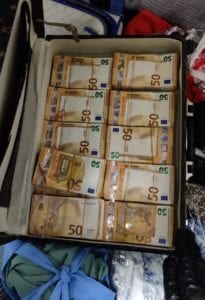 An international law enforcement operation coordinated by Europol and Eurojust with the involvement of three countries has resulted in the arrest of 12 suspects, including the masterminds, belonging to a Russian-speaking organized crime group involved in the illegal cigarette trade. The arrests took place in Belgium and France and included the leaders of the criminal organization.

Between May 4 and May 5, some 28 premises belonging to the crime gang were searched in Belgium, France and the Netherlands, according to a Europol press note. The investigators seized more than €1 million in cash alongside 11 vehicles and hundreds of counterfeit cigarette cartridges. The necessary supplies to make 1.8 million cigarette packages were also discovered at one of the searched locations. Two of the individuals arrested in Belgium are awaiting surrender to the French authorities under a European arrest warrant.

This international sweep followed a complex investigation initiated in July 2020 by the Belgian Federal Judicial Police of Leuven in close cooperation with Belgian Customs, the French Gendarmerie, French Judicial Customs, and the Dutch Fiscal Information and Investigation Service, with international activities coordinated by Europol and Eurojust. This operation was carried out in the framework of the European Multidisciplinary Platform Against Criminal Threats

The criminal syndicate, composed mainly of Chechen nationals, was involved in the large-scale production and distribution of counterfeit cigarettes. It is believed that this organized crime group is responsible for the distribution of at least 100 million cigarettes since the autumn of 2020, with an estimated value of more than €45 million.

The counterfeit cigarettes were stored in warehouses in Tienen, Belgium, before being subsequently distributed among buyers from France, Germany, the Netherlands and the United Kingdom.