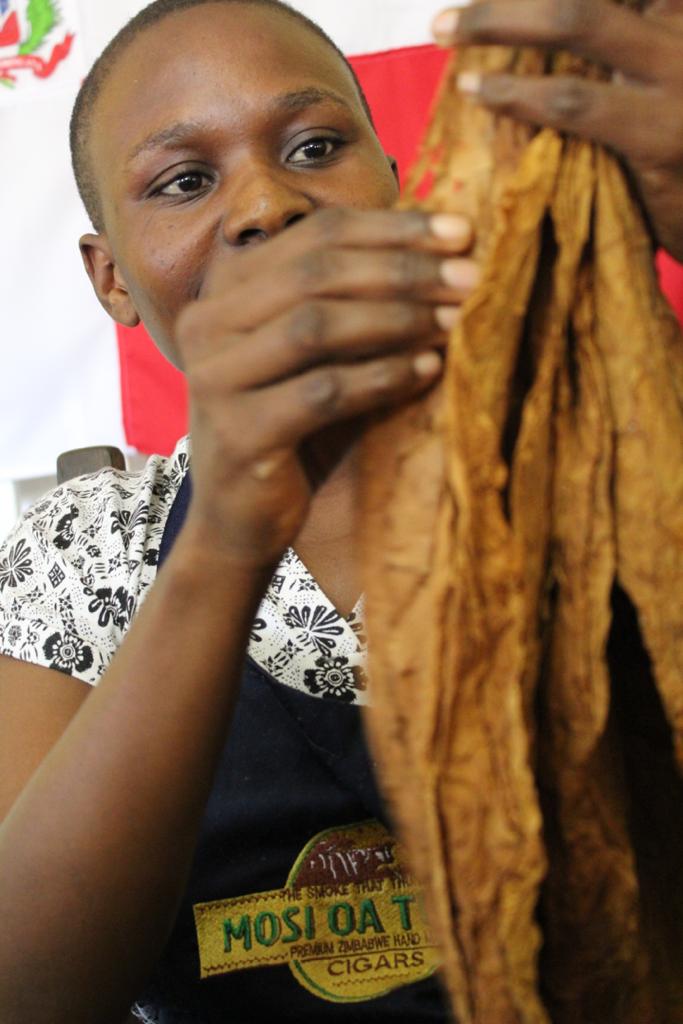 When water flowing along Africa’s fourth longest river, the Zambezi, plunges over a cliff to a gorge 108 meters below at a point on Zimbabwe’s western border with Zambia, it produces a roaring sound and a spray of droplets visible from 48 km away.

From a distance, the immense collection of droplets looks like a pall of white smoke. The Tonga people, among the first inhabitants of western Zimbabwe, call the landform Mosi Oa Tunya, “The Smoke that Thunders” in English. It is now officially known as the Victoria Falls after Scottish missionary and explorer David Livingstone first saw falls on Nov. 16, 1855, and named them in honor of Queen Victoria of Britain. In addition to being Africa’s most famous waterfall and Zimbabwe’s foremost tourist attraction, Victoria Falls is one of the seven natural wonders of the world.

Zimbabwe’s first cigar maker, which started operating in March 2020, aspires to be what Victoria Falls is to local and global tourism while giving consumers a smoking experience that thunders.

“The naming of the cigar is not by coincidence,” Mosi Oa Tunya Cigars founder and CEO Shepherd Mafundikwa told Tobacco Reporter. “This will be the smoke that thunders!”

Mafundikwa has never smoked but was motivated to consider investing in cigar making after he had a discussion with a friend while in the United States in 2019. They talked about Zimbabwe’s tobacco industry, its contribution to the southern African country’s economy, the level to which it is being beneficiated and prospects for growth. Cigar making featured prominently in their discussion. Mafundikwa had lived and worked in the U.S. for 15 years. Returning to his homeland, Zimbabwe, he and his friend Loy Veal started translating the casual conversation they had had into practice. Harare, Zimbabwe’s capital, was the natural choice for the setting up of the factory because the city is the center for tobacco trade in the country and is surrounded by four tobacco growing provinces.

Mafundikwa also travelled to Cuba and the Dominican Republic to learn more about cigar making as well as to recruit staff skilled in cigar rolling. He convinced several cigar rollers to come over from Cuba to help him launch the business, but after some time, most of them opted to return home. However, a veteran cigar roller from the Dominican Republic, Elias Lopez, stayed on and became the head of training. He has, since May, been training an all-female workforce of eight.

Lopez, who is also a cigar smoker, has been rolling them for 30 years in the Dominican Republic, Costa Rica, Nicaragua and Panama for companies such as Arturo Fuente, Davidoff and other legends. Prominent American film actors and producers Sylvester Stallone and Chuck Norris have smoked some of the cigars he has rolled during his time in the Americas, Lopez claims.

“When I agreed to come to Zimbabwe, I didn’t know what to expect,” Lopez said.

“I must say, I have been pleasantly surprised by the quality of the tobacco, the warmness of the people and the pace at which the students have grasped the cigar rolling skills. I’m proud to be associated with the first cigar making factory in Zimbabwe, and I look forward to being part of the growth this company will definitely experience. The world will soon know and love the Mosi Oa Tunya cigar brand.”

Zimbabwe is Africa’s leading tobacco growing nation and the sixth largest internationally. The three main types of tobacco grown in the country are Virginia flue-cured, burley and Oriental. Virginia accounts for over 95 percent of the leaf outputs, according to the Tobacco Industry and Marketing Board (TIMB).

Burley, which Mafundikwa says his company rolls into cigars, contributes between 2 percent and 3 percent of total yearly tobacco output in the country.

“Ninety-five percent of our cigar input is locally grown burley,” he said.

“The wrapper is imported. We are working with local experts to grow the wrapper, and hopefully we will soon have a 100 percent Zimbabwean cigar.” 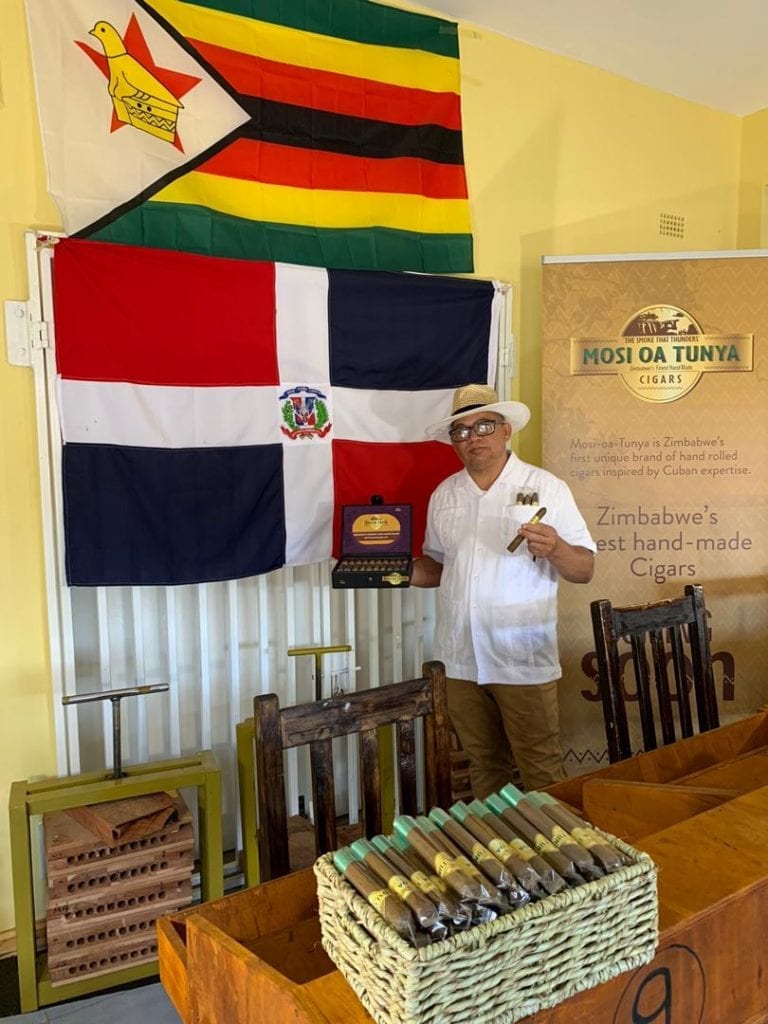 I have been pleasantly surprised by the quality of the tobacco, the warmness of the people and the pace at which the students have grasped the cigar rolling skills.

Goodson Khudu, a research and extension officer at the Tobacco Research Board, said burley is grown in Burma Valley in eastern Manicaland Province near Zimbabwe’s eastern border with Mozambique.

“That area has the right climatic conditions for the crop,” said Khudu.

“We have had some German interest in contracting local farmers to grow burley there, and it has been very successful. However, output has been low in recent years, suggesting that the company (Mosi Oa Tunya Cigars) might want to consider promoting its growing in a bigger way so that local production meets all their requirements.”

The German tobacco firm Von Eicken has been supporting farmers in Burma Valley to grow cubra. In 2016, 11 tons were produced under the Von Eicken initiative. The volume expanded to 20 tons in 2017 and 24.5 tons in 2018.

Mosi Oa Tunya Cigars recognizes that a large proportion of locally grown tobacco is exported unprocessed, a weakness that is shared by other countries in Africa. The firm produces three blends—light, mild and strong. The light flavor is for beginners and is available in mini cigars.

“Our staff is still undergoing training, and at optimum production we will be producing 1,500 cigars a day,” Mafundikwa said.

“We want to scale up production, but the final figures will depend on market demand. Surprisingly, there is a very vibrant cigar smoking culture which we were unaware of. At the moment, all our output is being locally consumed, and there is potential to grow the market as more people become aware of our product.”

He is happy to be contributing to local tobacco beneficiation in a country that exports up to 90 percent of its leaf raw.

“This is not peculiar to Zimbabwe,” said Mafundikwa. “It’s a continental problem where countries find it easy to export raw materials. In addition, finances also hinder players getting into manufacturing. We at Mosi Oa Tunya are playing our part in value addition. Governments have to come up with policies and support to start manufacturing entities.”

The cigar manufacturing industry in southern Africa is small, with reports that there are only two companies in the region that are in the business—Zimbabwe’s Mosi Oa Tunya Cigars and Bongani Cigars in neighboring Mozambique. The latter, which considers itself Africa’s first in this luxury market, hand rolls 10,000 cigars every month with locally grown tobacco and wrappers imported from Cameroon across the continent in West Africa. It was founded in 2016 and, like its Zimbabwean counterpart, relied on a maestro from the Dominican Republic to train Mozambican rollers. It sells locally and exports to South Africa, Kenya and Nigeria, among other countries.

Mafundikwa is aware that breaking the stranglehold of legends in the elite cigar market will not be easy for his greenhorn. However, his company has already had expressions of interest from Vietnam, Romania, Dubai and the U.S.

“We are making an African cigar, and we believe the quality is comparable to any brand anywhere given the legendary status of Zimbabwean tobacco. The lure of a new exotic and authentic African product will be our trump card, and we will thrive on competition,” he said.

Mosi Oa Tunya Cigars has been received well by locals who are excited that at last their country has an exotic product to match their nation’s lofty standing as Africa’s biggest producer and one of the world’s top six growers.

TIMB chief executive officer Andrew Matibiri said the government always encouraged greater investment in tobacco beneficiation, but the response has been slow. There are about four cigarette manufacturers in the country, with British American Tobacco dominating. The entry of Mosi Oa Tunya into the market, he said, is a welcome addition.

“It is clear that, yes, we are the dominant growing nation on the continent and among the top six globally, but that dominance has not been matched by corresponding investment in adding value to tobacco,” Matibiri said.

“I am talking here about the flue-cured leaf, which is more than 90 percent of the national output. But like Oriental and others, we are exporting them in raw form. Therefore, we welcome Mosi Oa Tunya Cigars in the context of the national effort to boost value addition and hope that, with time, they will get all their requirements locally. We are excited that they have joined that niche market and wish them the best.”