The legendary Rizla brand gets a makeover.

Having been told that the Rizla brand of rolling papers was being given “a very significant refresh to ensure it remains relevant, particularly for younger adult smokers,” I couldn’t help wondering how it was possible to know when a brand needed such a refresh. The answer, it turns out, is fairly simple, at least in theory. Andrew (Drew) Marfleet, the head of marketing for Rizla, told me during a Teams meeting toward the end of June that, in large part, it was a matter of asking the brand’s consumers.

Rizla, he said, had been talking to consumers for more than a year, and the feedback had included the message that, while during the past few years, changes had overtaken societies, the way consumers viewed brands and the way many brand owners presented their products, Rizla’s image had remained largely unchanged.

The message was clear and the solution seemingly simple, but this was not quite the case. In refreshing the brand, a number of other factors had to be taken into consideration, not least of which concerned the fact that while consumers wanted change, they were at the same time greatly attached to Rizla’s “iconic and legendary” status. Now words such as iconic and legendary are often bandied about where they really have no place, but this is not the case with Rizla. The Rizla brand, which was acquired by Imperial Tobacco, now Imperial Brands, in 1997, dates to 1796 and the granting of a license by Napoleon Bonaparte to the Lacroix family for the supply of its premium rolling papers to his troops, while the Lacroix family’s involvement with paper can be traced back to at least 1532 and Pierre Lacroix.

So there was something of a conundrum to confront because here was a rock-solid brand but one that had been around for the sort of timespan over which even rocks wear down. In other words, there was a tightrope for the marketing people to walk in trying to stay true to a venerable brand dating back more than 200 years, while bringing its image up to date. As Marfleet told the people around him, “no pressure then.”

In fact, negotiating the tightrope required an even trickier balancing act than is implied here. In recent times, Rizla has seen an uptick in demand from those in the 21–30 age group, and it was focus groups largely made up of such people who expressed a desire for a refresh. But the brand’s core consumers are men aged 35 and above, so any refresh needed to be mindful not to alienate them. Unsurprisingly then, Marfleet made the point that this group of older consumers also had been kept close to the research, though, ultimately, he added, it had been about listening to all of the brand’s consumers and keeping them at the center of everything that had been done.

I guess this approach goes to the heart of marketing, which is defined briefly as being about identifying consumer needs and determining how best to meet them. But care has to be exercised here; otherwise, like me, you can make an altogether wrong assumption. This refresh is about marketing, so these “needs” have to do with the brand messaging, not the product itself. 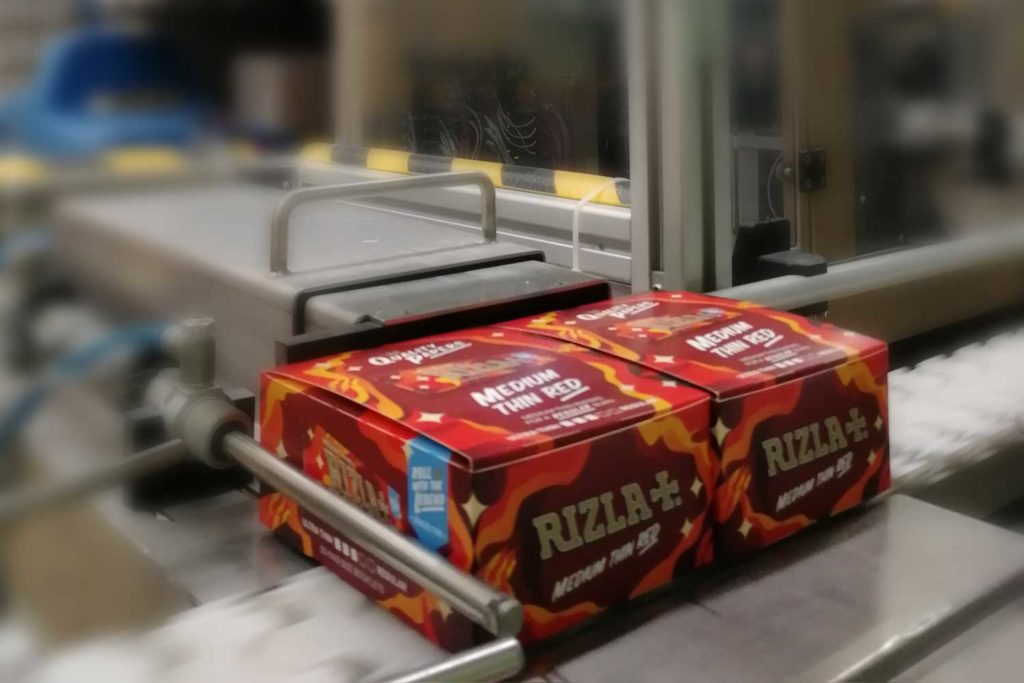 So, if the product remains the same, what is involved in a brand refresh? Well, according to Marfleet, it is ultimately about the brand’s strapline. “It is the visual positioning of the brand and the way that the brand communicates itself,” he said. “So, for as long as we can remember, Rizla has had the strapline of Never Settle [as, for instance, in: Keep Discovering—Never Settle; and Keep Creating—Never Settle]. What we have moved to, again after listening to our consumers, is celebrating our heritage and our legacy in a modern way. And that has led to our new brand positioning, which is, Roll with the Legend—Since 1796.”

Beyond the strapline, Marfleet said, the refresh was more generally about brand communication, which, of course, raises another question. Isn’t the communication of tobacco and tobacco-related products and brands banned in many jurisdictions, which certainly include most of the markets where rolling-tobacco products and accessories are popular?

Rizla was definitely limited in how it could communicate its message, Marfleet admitted, but it would be making changes in those channels open to it. So, instore materials would be changing, as would the brand’s online digital presence. A more specific example of the changes being made concerns a shift away from the sponsorship of motor sports and toward music and culture in general. Rizla has supported culture in the past, but now it is shifting all of its brand partnership efforts toward music and culture, which resonates more with the brand’s current consumers. Such a shift can be seen also in Rizla’s launch of a digital partnership with the global media platform Dazed, which positions it in the area of supporting emerging artists.

This is a global refresh that, at the time I spoke with Marfleet, had been rolled out in two key Rizla markets, Italy and Spain, and that was due to be introduced elsewhere in the coming months. It was designed by the Rizla marketing team in close cooperation with a creative agency during a year and a half of weekly workshops that decided, following the sifting of something like 10 iterations, on the new brand positioning.

The Covid-19 pandemic raised some challenges in respect of these workshops, but the overriding challenge, Marfleet said, had been ensuring that those working on the project got it right. In other words, the crux of the matter is: has it worked as a marketing project, and will it be successful as an investment? Well, apparently there has been excellent feedback after rigorous testing, and consumers in both the 21-plus and 35-plus age groups are said to love the refresh.

But rolling papers comprise a niche product, and tobacco smoking is under attack, so will the market hold up to such an extent that the investment will turn out to have been worth it? Marfleet clearly believes so. The RYO market, which was the subject of healthy competition, was quite stable at the moment as a result of downtrading, Marfleet said, and Rizla had definitely seen an uptick in those aged 21-plus picking up on RYO. “Given the stable market and our predictions, we definitely feel that the investment into the brand refresh is completely justified and will pay off,” he said. 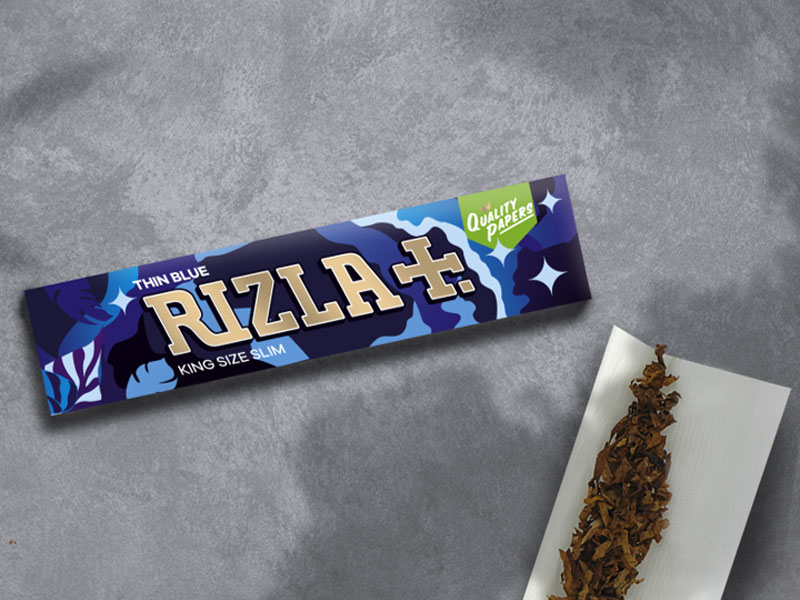 Of course, while Rizla says its products are aimed at the world’s adult tobacco smokers, it is likely that it will benefit from changes in some jurisdictions where marijuana smoking is being legalized. But on the other side of the coin, market challenges could be thrown up by revisions to the EU’s Tobacco Products Directives (TPD) and regulatory changes made by the U.S. Food and Drink Administration. However, Marfleet said these issues were on Rizla’s horizon. “What I can say is that we are proactively planning for multiple scenarios, especially with the TPD, so that we will be ready to take action whatever the outcome of that may be,” he added.

Meanwhile, there was another, unofficial focus group that was regularly kept appraised of what was happening with the refresh: the approximately 200 people who work at the Rizla rolling papers factory in Belgium, which supplies the world with such papers. And, according to Factory Manager Kris Smedts, all of the people working at the factory, who make up a wide range of ages, loved the refresh.

The factory, which was built in 1958 and which, over the years, has been expanded and automated to provide for an annual manufacturing capacity of up to 100 billion paper leaves, spread over a staggering number of SKUs (stock-keeping units), is located on the south side of Antwerp, at Wilrijk. It uses lean manufacturing techniques and is managed by an MRP (manufacturing resources planning) system because, though paper booklets might appear to comprise a simple product, their interleaved presentation is difficult to achieve, especially at high speeds, and the addition of innovations such as cut corners (to ease rolling) and pack-closing mechanisms have, over the years, added to the complexity of manufacture and logistical handling.

Another layer of difficulty is added because, since rolling papers are a niche product, it is not possible to buy off the shelf the machinery for manufacturing and packing it, so it has to be developed by the factory’s own engineers working with specialized partners. And because rolling papers comprise an evolving product, the factory has a special product development team that works on the design of the new or modified machinery required to manufacture the innovative products needed to stay ahead of consumer demands.

Finally, despite the refresh, some things will not change, or not much. During my chat with Marfleet, I mentioned a fairly raunchy Rizla marketing campaign used a good while ago, and he agreed that the brand’s marketing archives included campaigns that had been “on the edge of cheeky,” though, over the years, the cheek had been toned down in line with new advertising regulations. Nevertheless, he said, we’ll never forget that Rizla should always be a fun and quirky brand.