Tobacco farmers in Zimbabwe and Malawi have voiced concern over growing of the leaf under contract, saying the agreements are structured to benefit contractors, leaving them perennially in debt.

The Zimbabwe government, for its part, is unhappy that as much as 95 percent of the crop is financed by contractors, most of which are backed by offshore financial institutions. As a result, net foreign currency inflows into the country are only a small fraction of the value of exported tobacco, according to the Reserve Bank of Zimbabwe.

For example, net foreign currency inflows over the past two years were $87million from $1.6 billion worth of tobacco that was exported.

To reverse the trend, the government will, from the October 2021 to the March 2022 growing season, directly support farmers under a $60 million loan facility created under the recently launched Tobacco Value Chain Transformation Plan.

Shadreck Makombe, who farms tobacco in Gweru, 200 km south of Harare, welcomed the decision, saying the funding will not only benefit farmers but also help resuscitate auction floors, which now account for 5 percent of leaf sales. Under the current financing model, he told Tobacco Reporter, contractors are getting the lion’s share of proceeds while farmers are getting little, making it impossible for them to retool and go back to the fields without returning to contractors for more support.

“Whatever the farmers were getting through contractors is only going back to them, as the funds and inputs provided would be repaid at premium interest. So basically, the farmer becomes a worker of contractors,” he said.

Makombe, who is also the Zimbabwe Commercial Farmers Union president, said if the $60 million is well managed and distributed, it will leave farmers at a better position to repay as they will be assured of a profit if they work efficiently.

“There’s no way farmers can do it alone. Yes, large-scale farmers may do that, but generally, the middle-income and small-scale [growers] need to be assisted,” said Makombe.

Zimbabwe is Africa’s No. 1 producer of tobacco by volume. It produced 210 million kg this year, an increase from 185 million kg in 2020. 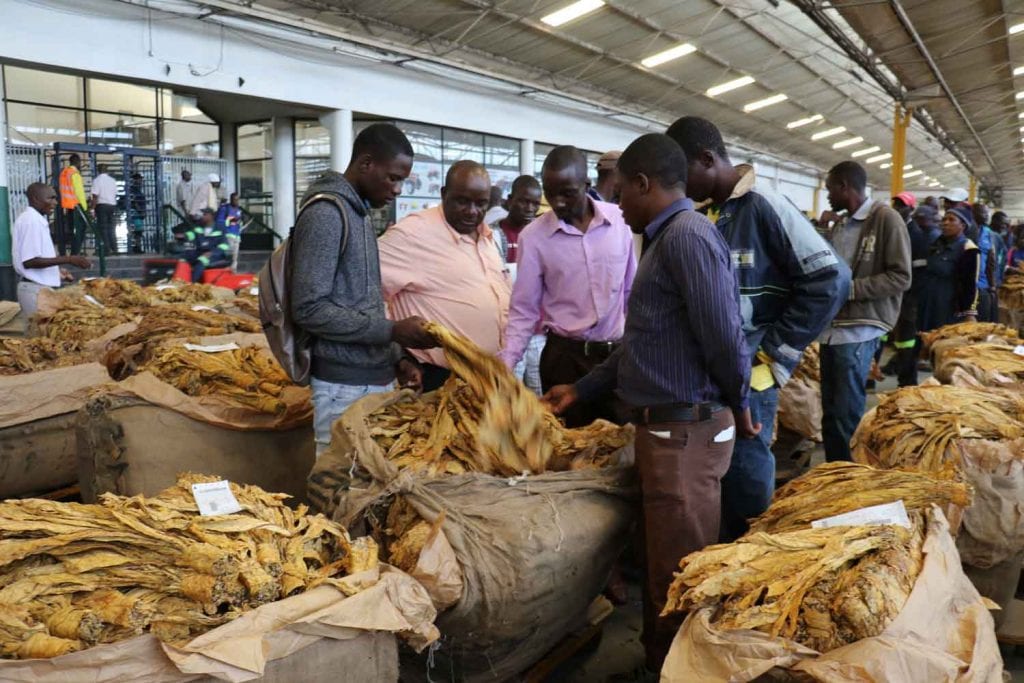 In a Sept. 7, 2021, briefing to journalists in Harare, Publicity and Broadcasting Services Minister Monica Mutsvangwa said the Tobacco Value Chain Transformation Plan aims to boost farmer viability and independence as well as increase net foreign currency earnings. The strategy is not meant to supplant contractors, she said, but to push the industry to contribute more to the gross domestic product (GDP), foreign currency earnings, employment and farmers’ incomes.

“The strategic objectives of the plan are to localize the funding of tobacco to complement external funders, to raise tobacco production and productivity from 262 million kg to 300 million kg by 2025 and to diversify and increase the production of alternative crops, such as medicinal cannabis, and increase their contribution to the farmers’ incomes to 25 percent by 2025,” she said.

The plan also aims to increase the level of value addition of tobacco from 2 percent to 30 percent. Furthermore, she said the plan will incentivize investors to set up cigarette manufacturing plants locally so that the country exports less raw or semi-processed tobacco.

Tobacco Association of Zimbabwe President George Seremwe urged the government to involve farmers in working out disbursement modalities for the financing localization facility to succeed.

“Without the involvement of farmers and farmer organizations, we will fail,” he warned.

An average of 120,000 households, mainly smallholders, grow tobacco in Zimbabwe, according to the Tobacco Industry and Marketing Board (TIMB). They often lack resources to finance production, and because they lack collateral security, they do not qualify for bank loans, hence their reliance on contractors.

“This fund is meant to support 50,000 hectares (ha) of tobacco production, so ideally, if all applicants who apply are growing one hectare, that means 50,000 farmers will benefit,” said TIMB spokesperson Chelesani Moyo. “The funding facility aims at boosting production using local funds as the country works toward driving the tobacco sector into the $5 billion industry by 2025.” 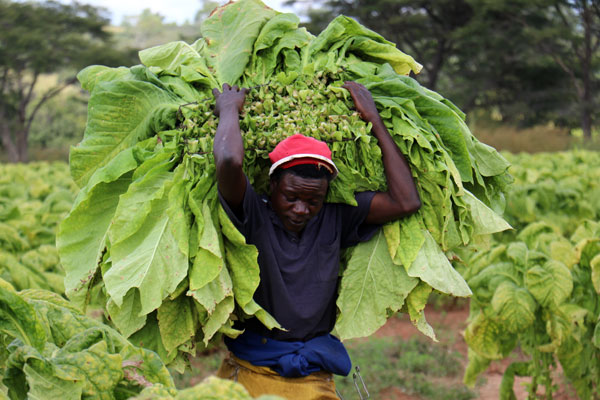 The company’s finance and administration executive, Augusta Ajento, expected the loan facility not only to create employment but also to facilitate capacitation of the downstream. The packaging, fertilizer manufacturing, banking and insurance industries will benefit from more funding into tobacco cultivation, he said. The interest burden to be borne by farmers, he added, is likely to decline because a portion of funds that ordinarily would have been obtained offshore by contractors will now be available locally at lower cost.

“I don’t see any threat to contract farming because what it does is maybe improve efficiency and reduce overpricing. It improves efficiency on the part of [the] contractor because they will now be competing with the open market because at the moment, farmers have got no option; they have to go [with] the contractor, and they are contracted at the contractors’ terms. Such arrangements leave farmers with no alternative of sourcing financing, but [the contractors] are now given an opportunity and option to source their needs from various suppliers to improve on their returns,” he said.

Shasha contracts 4,800 growers yearly, and Ajento was optimistic it will retain them, citing the company’s investment in building relationships.

“The farmer will ask, ‘Was I getting a fair deal from the contractor or a raw deal?’ If it was a raw deal, the farmer will leave you. If the inputs were overpriced, they will also leave you, but if you were professional in your approach, they will stay put,” he said.

On the future of contract tobacco farming, Ajento called for increased technical support to farmers so that they can produce more per hectare as well as improve leaf quality. This, he said, can be achieved through regular training.

“We give agronomist services to our farmers. We just don’t give inputs; we employ what we call leaf techs and agronomists who move around teaching farmers best practices in tobacco farming,” Ajento said of Shasha. 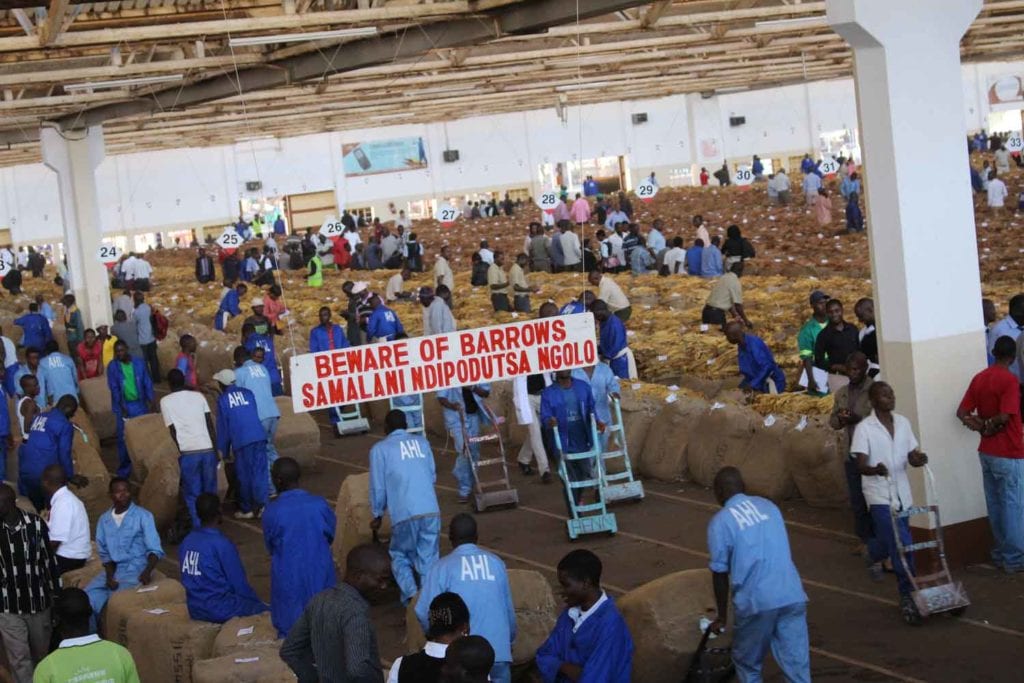 At the opening of Malawi’s selling season in April, President Lazarus Chakwera expressed dissatisfaction at what he said were “dubious” levies imposed on farmers by contractors who support production of 80 percent of the Malawian leaf. He lamented farmers’ low bargaining power.

Protests at trading floors over low prices are common in Malawi. In February 2015, unions petitioned the government to change contract farming legislation to better protect their rights.

“It’s better to withdraw and let those companies do the work. It’s not in order for a farmer to spend time growing tobacco and later earn less. This is disgusting,” farmer David Chirwa told Malawi24 in August.

Other farmers threatened to quit contract tobacco farming and take up farming maize, groundnuts and soyabeans.

Malawi is the world’s most tobacco-dependent country. The golden leaf accounts for up to 40 percent of the nation’s exports, 60 percent of foreign currency earnings and 11 percent of its GDP.

However, a top buyer of Malawi’s crop insisted his company pays growers well.

“For us, the trend is different,” said Limbani Kakhome, director of corporate affairs and communications at Japan Tobacco International Leaf Malawi. “Our grower retention rate is over 95 percent year-on-year for the past five years or so, and the queue of growers asking to join our contracts is endless. We also are working with growers to diversify their farm revenue income streams.”

A Malawian think tank says that while grower numbers have declined, yields and acreage have risen.

According to the Malawi Agricultural Policy Advancement Agenda (MwaPata) there has been movement into and out of tobacco cultivation by farmers depending on market and growing conditions, but a larger share of households is dropping cultivation than adding tobacco.