The vaping industry won’t reach its full potential until its products can deliver nicotine to the body as effectively as a combustible cigarette. The new FEELM Air fully integrated vaping solution brings the industry one step closer to that goal. The FEELM Air offers several improvements on previous closed system vaping devices, including the next generation of FEELM’s industry-leading ceramic coils.

There are three major improvements to FEELM’s latest coil technology that are the cumulative achievements of a team of 500 scientists and nearly seven years of research, according to FEELM. “FEELM Air is the outcome of cross-disciplinary research and a revolution to [the] ceramic coil,” said Frank Han, president of FEELM, at the opening remark of the launch event. “It replaces the single-layer film with a seven-layer bionic ultra-slim film. The thickness of the film is reduced from 80 micrometers to 2 micrometers, which is 40 times thinner than the last generation.” 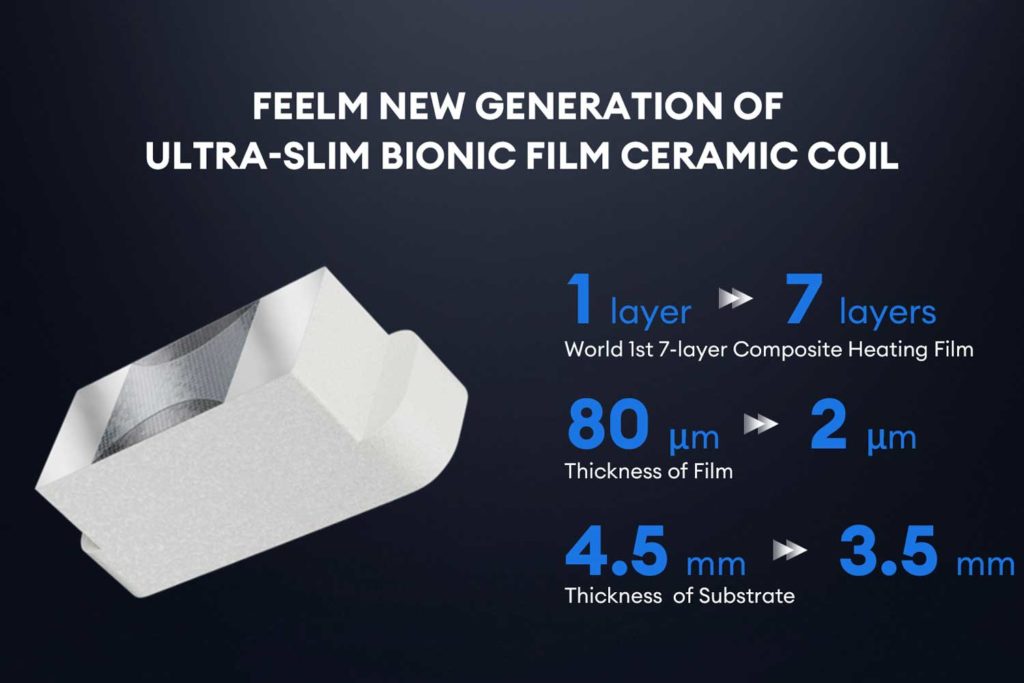 The overall improvements of FEELM Air are attributed to a new generation of USBF ceramic coils, which incorporate a seven-layer composite heating film made of bionic material for the first time in the vaping industry. FEELM representatives said that each layer leads to an equally enhanced functionality.

The second innovation in the USBF coil is its use of a nanoscale vacuumed film-forming technique to help the heating film distribute heat more evenly across the coil for accurate temperature distribution. The final innovation is a microporous bionic structure that provides smooth ventilation as well as a strong e-liquid locking layer to prevent any leakage.

Additional improvements to FEELM’s USBF coil allow the overall FEELM Air to bring major breakthroughs to the vaping experience, including an integrated micro-electromechanical system (MEMS), the industry’s highest level of energy efficiency and its smallest linear motor, according to FEELM.

“It has the world’s first seven-layer composite heating film made of bionic material. Most of the existing ceramic coils are single layered, and now we have a seven-layered composite heating film,” a FEELM representative explained. “It can improve the harm reduction and improve the energy efficiencies, and each layer will lead to a corresponding functionality improvement.” 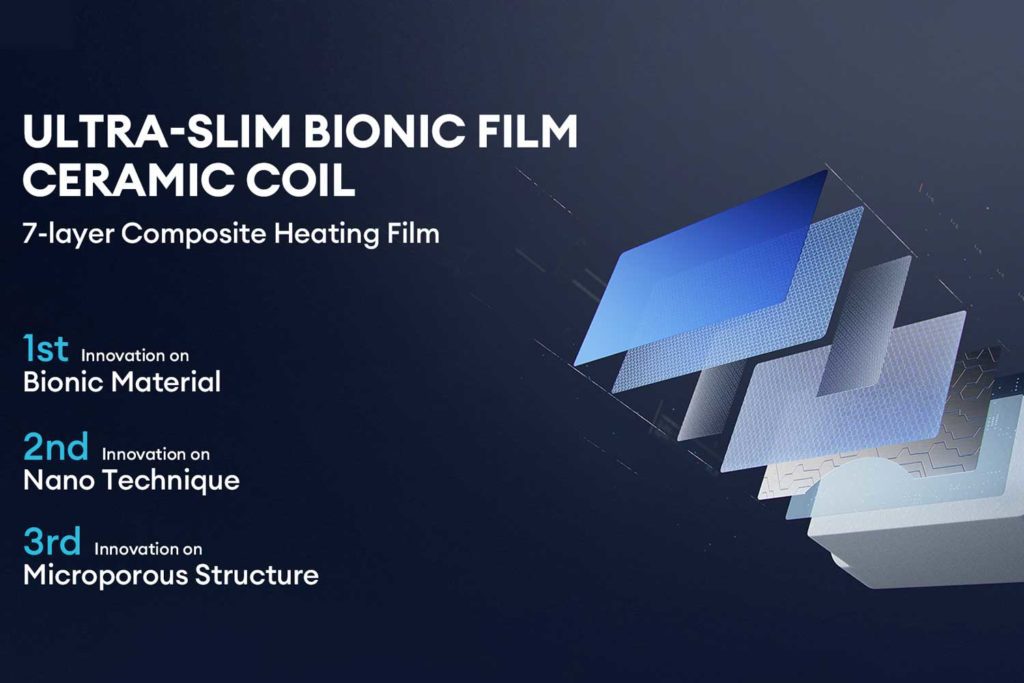 “Ever since the launch of the world’s first black ceramic atomization coil with metallic film in 2016, FEELM has changed the whole competitive landscape, ushering in a new era of ceramic coil. It has largely enhanced harm reduction with accurate heating temperature control and revolutionized vaping experience with smooth and pure taste till the last puff,” said Han. “More importantly, FEELM has effectively addressed the industry’s pain points of leakage and dry hits.”

To keep up with the enhanced vaping experience the FEELM Air provides vapers, the company announced the launch of its second generation of the FEELM taste evaluation model during the FEELM Air launch event. To better understand taste experiences while vaping, FEELM introduced its first taste evaluation model in December 2020 that gave FEELM researchers the ability to describe the taste of atomization scientifically. Composed of four dimensions—flavor, strength, note and vapor—and 51 specific indexes, the model establishes a system to evaluate the human senses of mouth, tongue, nose and throat.

“Now, it’s five dimensions and 65 indexes. It’s more complicated in evaluating aroma, aftertaste, taste/mouthfeel, impact and vapor property. We built up an in-house sensory evaluation team. We have experts with certain backgrounds in tobacco science and vaping taste evaluations,” a FEELM representative said. “The team’s experience in the science of evaluating flavors ranges from five years to 13 years. They are the experts in evaluating vape ingredients.” 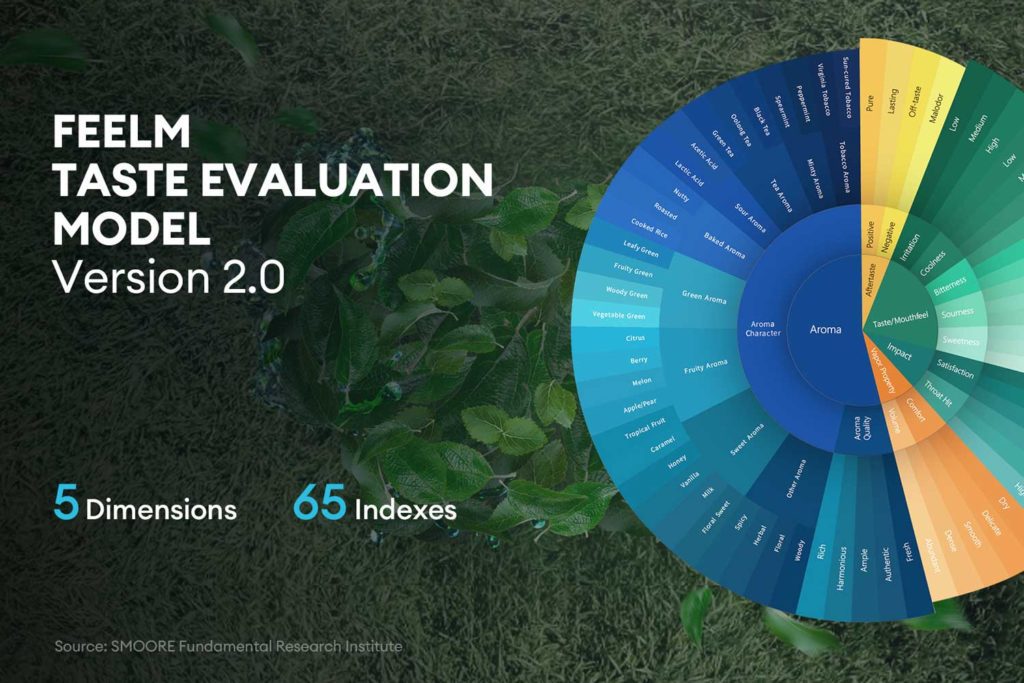 During the event, Han also announced a brand refresh for FEELM. The new brand concept is composed of five words: feel, engine, exploration, lifestyle and memory, echoing the five letters of the brand’s name. He has also unveiled the new logo, which has the contour of a ceramic coil in the shape of a window. It symbolizes “FEELM’s ‘window to ultimate sensation,’” said Han. “The ‘open window’ stands for the infinite pursuit of a better sensory experience, representing FEELM’s commitment to ultimate sensation.”

The FEELM Air may be the bridging device that brings vaping magnitudes closer to the nicotine delivery and sensory experience combustible cigarette smoking offers, only in a format that Public Health England has said is 95 percent safer. It’s too early to tell, but the FEELM Air may motivate an even greater number of cigarette smokers to switch to vaping than previous devices.

“Vaping devices loaded with FEELM atomizers have been exported to over 50 countries in Europe, America, East Asia, Africa and Oceania with an accumulated sales volume of over 3 billion pieces,” Han said. “FEELM has never stopped the constant exploration for ultimate sensation. By virtue of FEELM Air, equipped with the ultra-slim bionic film ceramic coil, FEELM is ready to drive another paradigm shift in the global vaping industry, leading the second sensory revolution of ultra-slim devices and ceramic coils.” 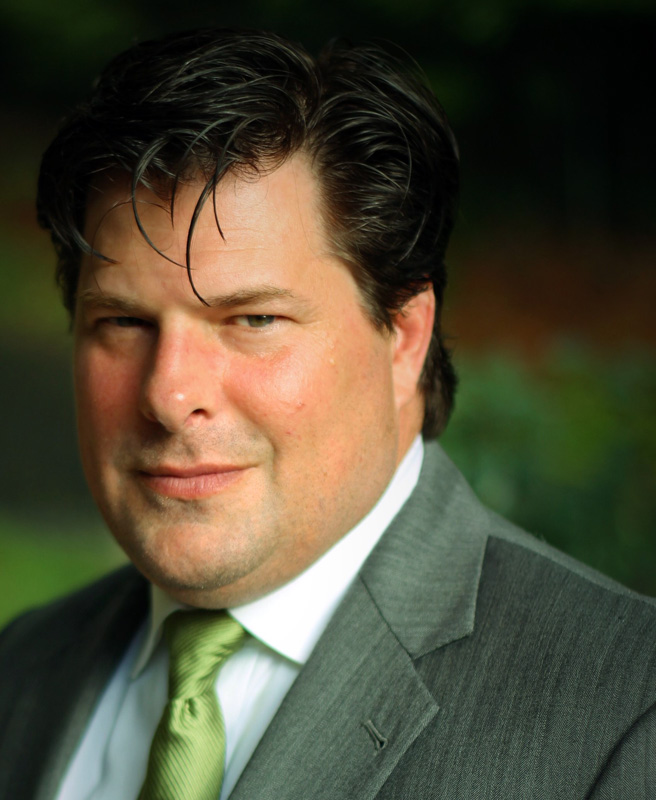