Having prevailed in an intellectual property dispute, Julius Glatz prepares to reenter the market for lower ignition propensity cigarette papers.

This follows a four-year hiatus during which it was forced out of that market as a result of a patents dispute it eventually won in September last year, after a legal battle that, in total, lasted six years.

Nina Ritter-Reischl, a managing partner at Glatz, told Tobacco Reporter during an exchange in January that, having overcome the difficulties of those four years, the company, which produces a large range of papers, mainly for the tobacco industry but also for other industries, was keen to return to the LIP market and, indeed, had already started work on doing so.

And this won’t be a case of starting from scratch, of course. “As we were able to retain at least some of our core personnel, we can build upon their know-how and knowledge to produce LIP papers with the high standard our customers know us for,” said Ritter-Reischl. “Our customers will still find their former contacts in our technical, R&D and sales teams.”

Meanwhile, the machine that Glatz used in the past to produce its LIP papers has been geared up at the production site where those papers were manufactured previously, in Neustadt, Germany, about 10 km from the company’s base in Neidenfels. “Our LIP machine has been maintained during the down period, some parts have been renewed, and our control technology has been upgraded within the last months,” said Ritter-Reischl. “Those investments were made to ensure production of all kinds of LIP papers.

“As our application system is very flexible,” she added, “our production range and products are as well. We can therefore produce LIP papers to the specifications our customers were used to, or we can develop papers with new specifications according to our customers’ needs.”

Of course, during the period when it wasn’t possible for Glatz to manufacture LIP papers, the company didn’t just sit on its hands; it used the time to concentrate on another type of demanding tobacco industry paper. “We were able during those four years to focus on another part of our core competences—our tipping base paper production,” Ritter-Reischl said. “Those papers also are very complex and demanding papers in the industry, and our quality and service for those is a benchmark.”

That’s not to say, however, that the renewed opportunities that LIP paper production now offer isn’t massively important. In corresponding with Ritter-Reischl, I got the impression that Glatz was not only taking a huge amount of pleasure in being able to restart its LIP papers operation but also relishing the fact that this meant it could once again offer a complete range of tobacco industry papers. “Entering back into the LIP market, we at Glatz can offer our customers not only additional papers, [but] we can again provide them with the full-service range of all papers for the industry, from plug-wrap papers and tipping base papers to cigarette papers, including LIP papers,” she said. “We are able to offer all these papers manufactured to the highest qualities and within the most demanding specifications. And we can offer a flexible service delivered through short lines of communication by a dedicated team of traditional paper makers.”

Currently, Glatz’s LIP papers production unit is making trial runs to produce papers of various specifications for a number of interested customers, but it expects to have to ramp up its production level to full manufacturing mode during the next few months. 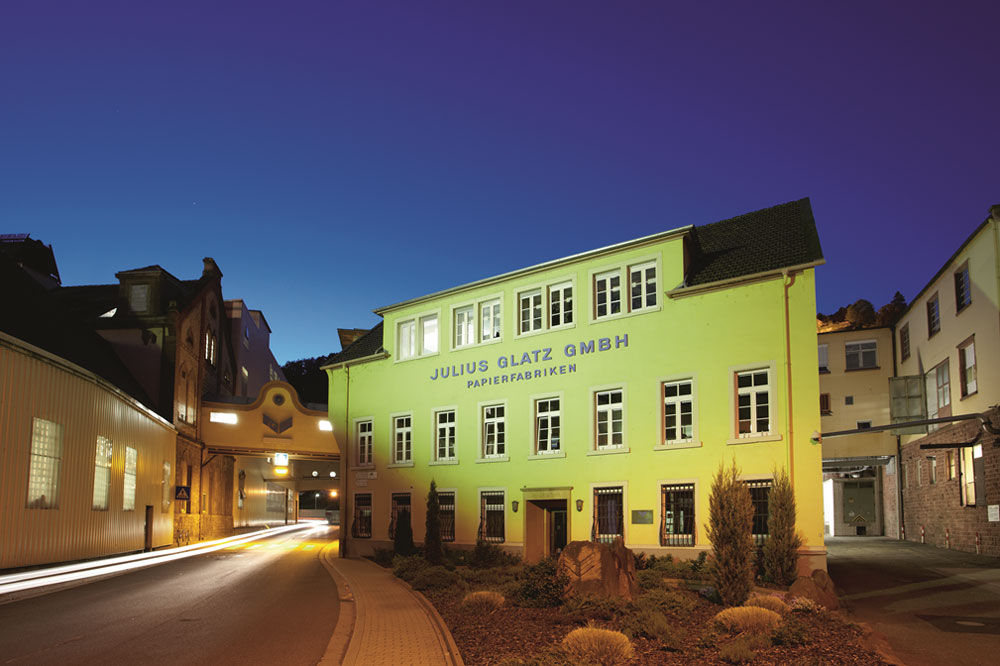 Ritter-Reischl, who is a lawyer, seemed frustrated that discussions and legal disputes over one LIP patent had taken so long but pleased that that period was now behind the company. “As the patent was held to be invalid, this pulled the rug from under all the accusations made against Glatz,” she said. “But, needless to say, this dispute and the interim consequences were a burden for us over the past four years, and only a company like ours with a very resilient financial, social and competitive structure would have been able to endure such a phase.”

Julius Glatz is a family-owned medium-sized company with more than 135 years of experience in producing paper in Neidenfels, Germany. “We are a traditional and sustainable asset in the region, being ourselves aware of the responsibility we have toward our employees, our environment, our suppliers and, most important[ly], our customers,” said Ritter-Reischl.

The company was started in 1885 by Wilhelm Adolph Glatz, Franz Julius Glatz and Hans Haehnle when, between them, they founded the Glatz papermill at Neidenfels in the Palatinate Forest. Almost 100 years later, in 1990, Glatz became the first fine paper manufacturer to offer thin printing papers and cigarette papers of TCF (totally chlorine-free) quality. And, in 1994, Glatz became part of the first Sino-German joint venture in the field of tobacco industry papers with the founding in Yunnan province of Yunnan Hongta Blue Eagle, which quickly went on to produce premium cigarette paper of international quality standards.

Now, as it navigates 2022, Glatz can look forward to the boost that being able once again to participate in the LIP papers market will bring. But the question arises as to what the future holds for Glatz beyond LIP papers, and Ritter-Reischl started answering this question by admitting that, overall, the outlook for the traditional tobacco industry was not exactly rosy. Everyone knew, she said, that the tobacco market in general was difficult, as regulations and tobacco product taxes were increasing while the number of smokers was decreasing. Nevertheless, she indicated, Glatz was optimistic about the future, and part of that optimism seems to be coming from what is perhaps an unexpected source. “Due to the coronavirus pandemic, customers have come to realize how important local sourcing, flexible service and short communication tracks are,” said Ritter-Reischl. “And those are all services and assets that we can offer firsthand.”

Another reason for optimism at Glatz was that the idea of sustainability was becoming more and more important and into focus, said Ritter-Reischl. “As a family-owned business with a history of 135 years in paper making, [we] are sustainable by our very nature,” she said. “We value our employees and suppliers, we take care of our environment, and our customers are always in focus as we conduct every aspect of our business.”

Of course, individual businesses can expand even when the markets they serve are not expanding by, in one way or another, increasing their market shares or by diversifying. And in this regard, Glatz sees opportunities arising in the future as paper products come to replace other materials, such as plastic. “Our thin papers with their special haptic properties can be used in other industries to substitute for foil or other wrappers,” she said. “Therefore, alongside our tobacco papers specialization, we have the opportunity of diversifying into other aspects of fine papers. And this will be one of the options we will focus on in the future and that will help keep us optimistic in the face of the challenges to come.”