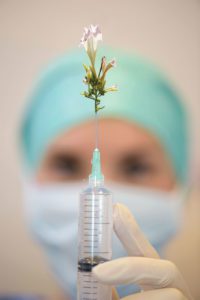 The World Health Organization is unlikely to grant emergency approval Medicago’s tobacco plant-based Covid-19 vaccine due to the company’s ties to the tobacco industry, the CBC reported on March 17.

The global health body has reportedly paused the process for pre-qualification of Medicago’s new Covifenz shot due to its link to Philip Morris International, which owns about one-third of the Canadian biopharmaceutical company.

“Due to its connections [to PMI], the process is put on hold,” said Mariangela Simao, the WHO’s assistant director-general for drug access, vaccines and pharmaceuticals, at a March 16 media briefing.

“The WHO and the U.N. have a very strict policy regarding engagement with the tobacco and arms [industries], so it’s very likely it won’t be accepted for emergency use listing,” she said.

In February, Health Canada approved Covifenz for adults 18 to 64 years of age, making it the world’s first vaccine approved for human use that utilizes a plant-based protein technology. The Canadian government floated CAD173 million ($136.74 million) to help the company develop the jab and is so far the only country to approve it.

In October 2020, Canada signed a deal to buy 76 million doses of Medicago’s vaccine, and the shot is expected to be made available to the public in May.

In a statement published by the CBC, Medicago said it believes authorization decisions should be based on the quality, efficiency and safety of the vaccine, not who owns shares in the manufacturer.

“It is our understanding that the WHO has made a decision to pause the approval of the vaccine and that this decision is related to Medicago’s minority shareholder and not to the efficacy and safety of the vaccine, which was demonstrated with the approval by Health Canada,” the statement reads.

Derek Yach, a global health consultant, was aghast by the WHO’s  suggestion that it would reject Medicago’s vaccine based on the company’s relationship with PMI.

If the WHO follows through, the vaccine would be the first Western-manufactured Covid-19 shot to be rejected by the global health body, according to Bloomberg.