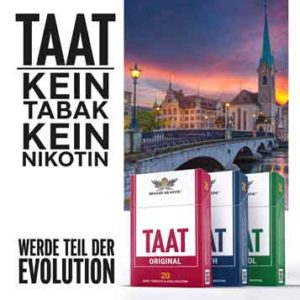 In a press note, the company announced that it is working with a tobacco distributor with a presence in Zurich and Zug to coordinate a near-term launch of Taat Original, Smooth and Menthol in Switzerland with a primary objective of capitalizing on recent changes to Switzerland’s market landscape causing tobacco brands to be prohibited from advertising in public places.

Although tobacco advertising has long been banned in most Western markets, Switzerland was among the last to allow tobacco product advertisements in public spaces (e.g., on billboards, in movie theaters and at events such as music festivals). On Feb. 13, 2022, voters in Switzerland overwhelmingly approved legislation forbidding tobacco companies from advertising in public spaces.

Taat Global Alternatives has been exploring several launch opportunities throughout Europe, particularly after finalizing the advanced formulation of its Beyond Tobacco product using reconstituted material.

Taat says its advanced Beyond Tobacco formulation yielded excellent feedback from tobacco wholesalers in markets to include Germany, Poland, France and Switzerland. Pending final regulatory approval of the Taat product by Swiss authorities, the company expects Switzerland to be the first new international market to be added for Taat in 2022 following the pending finalization of a distribution agreement and initial purchase order. Switzerland currently has a higher adult smoking rate than the European average at 27 percent, more than double the national rate of 12.5 percent in the United States.

Because Taat’s offerings contains no tobacco, the company expects to enjoy a comparatively high degree of freedom to market the products in Switzerland.

In the United States, Taat has advertised its brand as a better alternative to tobacco cigarettes through methods such as in-store displays at the point of sale as well as sports sponsorships (e.g., a stock car racing team, the entourage of world champion boxer Floyd Mayweather). The company intends to strategically place German-language advertisements as part of its launch plan in Switzerland, with French-language variations for markets in western Switzerland such as Geneva, the country’s second-ranking city by population.

“As the tobacco industry continues to evolve, it is a major part of our playbook to jump on opportunities to do things that tobacco companies cannot do as a way for Taat to gain a competitive advantage. Switzerland was already a target market for a future Taat launch due to its relatively high adult smoking rate of 27 percent and its optimal location in the center of Europe, sharing a border with five other nations.

“However, with Switzerland set to put an end to tobacco advertising based on a vote for new legislation last quarter, we recognized this impending change for the timely opportunity that I believe it to be. We are working closely with a Swiss tobacco distributor who is now in the final stages of obtaining government approval for Taat to be sold in Switzerland, and I am excited for the next steps as we continue to build out our tobacco industry footprint.”